Feeling disappointed but wondering if I'm just not using it right

I shoot my beach calligraphy into the sun a lot. In fact the sun is hard to avoid when you’re using a Nikkor 14-24mm lens, so when I saw HDR Effex come on sale I got my hopes up but I have to say, after trying it for a few days, I’m disappointed. I’m going to give my reasons and hopefully someone can explain to me how I’m just not using it right because I really do need a decent HDR solution and I’m not willing to commit to Adobe’s monthly USD with my pathetic ZARs.
My immediate impression was bad because all the preset modes are way too garish for my taste. I couldn’t help wondering if it shouldn’t it be called HDR Effex Extreme? Nonetheless, I figured I could try using them as starting points and just tone them down. It was hard work and the results … frankly, I’m not a professional photographer, but I fount the results unacceptable.

The first image was the best I could do on this two-exposure image using the Effex Pro default as a starting point. I had to fiddle endlessly to get it to this. 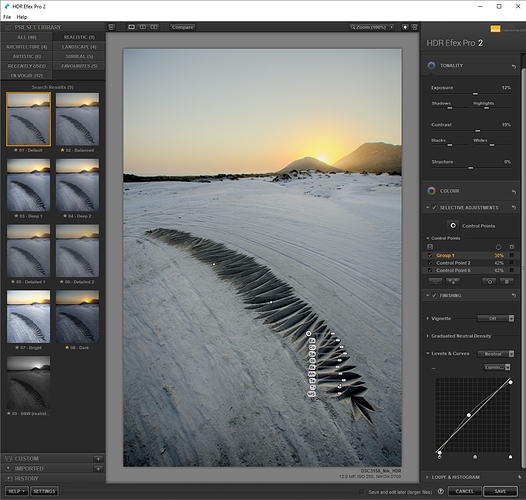 HDR Effex 011264×1200 260 KB
The second image shows the lower exposure of the two and the third image is the result I got my old way of working directly with it in Photolab. There’s a lot of tweaking involved but the result is way better. 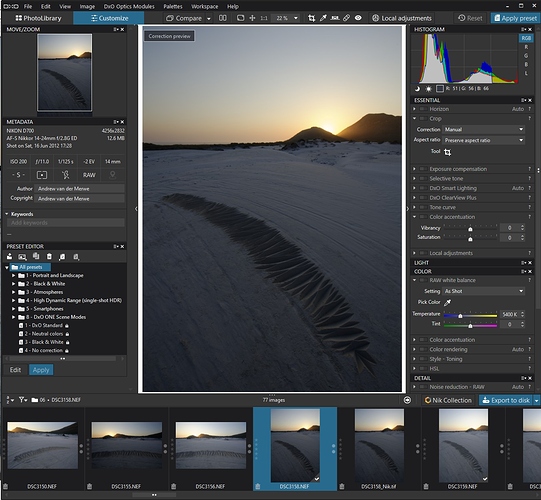 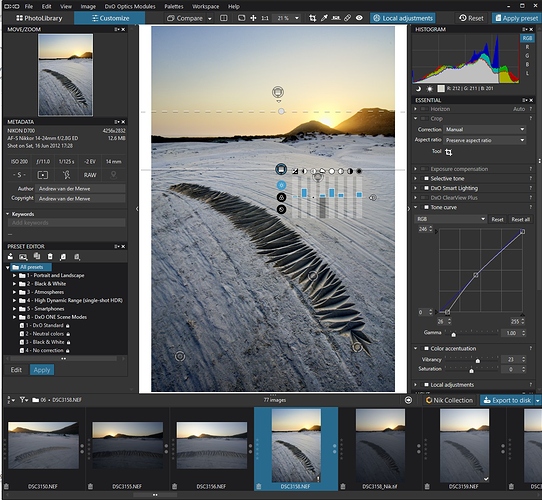 The app’s controls were frustrating in places:
• The fringing is awful on hand-held shot. It looks like a failure to align the shots (see my last image) and there is no way to tweak the alignment manually.

• It is impossible to tell ordinarily where the upper and lower blend is happening. My solution is to whack the lower tonality down 3 stops so you can see where it is, position it and then continue with trying to get a natural-looking image.
•It is impossible to delete a node you’ve added to the levels and curves (this can happen by accident if you miss-click one). You have to reverse out with Ctrl-Z or revert to scratch by switching between presets and then back to neutral.
• Zooming in and out is frustrating because HDR Effex talks a different language to PhotoLab. I keep trying to zoom using my mouse wheel (a feature I love in PhotoLab) and then have to revert to the crude zoom thing top right.
• The selection control points are simple circular, gradated masks, nothing like the nice, colour and brightness -selective ones I had in Capture NX2. With NX2, if you placed a control point on a highlight, it would give you selective control over the highlights in that region. This just bluntly affects the whole region. However, you can counter that by placing a neutral control point on a nearby shadow if the opportunity arises.

I’ve had the same concerns about fringing/ghosting and about all of the presets looking too garish. In the latter case, I found that getting the result I wanted was possible but took a tremendous amount of work. As for the color fringing: other HDR tools I tried generated similar aberrations with the same images, so it wasn’t particular to HDR Efex Pro in my experience. A combination of global and local adjustments can mitigate it. (It’s either ghosting from small differences in multiple images being stacked together or chromatic aberrations in the lens - or a combination of the two.)

My immediate impression was bad because all the preset modes are way too garish for my taste. I couldn’t help wondering if it shouldn’t it be called HDR Effex Extreme?

I’ve tried several HDR programs, including Aurora 2018 (way, way too garish!), Affinity (not as bad, but no DxO lens corrections) and HDR Effex. I think they all could be better. And it would be nice if DxO either directly incorporated Nik tools into PhotoLab or at least made the UI consistent across the suite and with PhotoLab.

Affinity (not as bad, but no DxO lens corrections)

My approach is to first process the component images in PL (applying lens corrections, PRIME NR, Chromatic Aberration correction, etc) - then passing them, as 16bit TIFFs, to Affinity, which does a very good job with them.

My approach is to first process the component images in PL (applying lens corrections, PRIME NR, Chromatic Aberration correction, etc) - then passing them, as 16bit TIFFs, to Affinity , which does a very good job with them.

I have exactly the same approach.
Patrick.

From DxO for RAW-development and necessary lens/light/… corrections to Affinity Photo for further post-processing including layers and masks is also my preferred workflow nowadays! That’s also the reason why I have not made much use of PL’s local adjustments.

Perhaps I misunderstood John-M statement or I’not precise enough.
I was writing here only about HDR, and also mainly focus stacking.
But for most of my images, I only use Photolab to proceed my Raw and if needed export in jpeg or another format.
Affinity is only for specific situation not managed in DPL, ie many repair/clone operations.

Perhaps I misunderstood John-M statement or I’not precise enough.
I was writing here only about HDR, and also mainly focus stacking.

Yes, my response was specifically related to stacking of multiple “component” images (HDR, focus, Panoramas, etc), which Affinity handles very well … otherwise, I use PL for all my photo correction/enhancement needs - along with occasional use of Nik Color Efex Pro for images that warrant some additional care.

Good John,
so we are totally in synch!

Hi @Beachscriber,
just by chance I stumbled over this thread.

I didn’t use the (now old but still very good) Nikon 2,8/14-24mm for some time and went to search for pics with strong counterlight, that are prone to CA. At that time I developed my pics with LR5. – Now it was great to see PL4 reducing CA in almost all cases automatically and only in few instances I could improve the result with additional manual adjustments. So, just remove CA properly before sending the Tiff-files to HDR Efex.

Important note, this lens esp. at the wide end is more prone to CA when used wide open, so better to stop it down to f4 or f5,6, if possible.

As I don’t have much experience with HDR photography I looked for some information. Maybe you have seen these videos already

You’re right about the 14-24mm being prone to chromatic aberration in the edges but this isn’t a case of CA and the pic you see here was shot at F11. This is a case of exposure misalignment by HDR Effex and is bigger and more dramatic in effect than the “misalignment” one gets from the CA in the 14-24mm. It also can’t be fixed by PhotoLab’s CA fixer which usually does a great job with it on my RAW images.

It is a fatal flaw of HDR Effex that one cannot tweak the alignment. That is a deal-breaker.

I am happy with Photomatix for my HDR pics. I do DXO first - lens corrections only and the exported tiffs into Photomatix.

Hi Andrew, as you wrote

The fringing is awful on hand-held shot. It looks like a failure to align the
shots (see my last image) and there is no way to tweak the alignment manually.

at first, I was not sure if understood right. So, I did some experiments now and can confirm, that HDR Efex doesn’t fix misaligments from multiple exposures, when camera is handheld.

more in detail
I took quite a few test shots, handheld and from tripod, used different lenses (fixed focal lenses 50mm and 20mm // zoom lens 14-24mm at 14mm) and decided for 5 exposures each (with 1 EV-stop difference), while with nowadays sensors 3 exp with 2 EV-stop gap should be sufficient and also less demanding for HDR Efex’ algorithms.

Everything was developed in PL4 with DxO’s standard correction and then sent over to HDR Efex, resulting in

I also used ‘Alignment’ and ‘Ghosting’ with the handheld shots

From the video and some online help I understood, that ‘Ghosting’ should help with single moving subjects (like people, branches etc), one can exclude from the rest.

So, when using HDR Efex one needs a tripod – and to be fair, I expected so. Otherwise it would have been THE convenient solution [ btw, since 2010 ].

Yes, I wish I could have a tripod with me on the beach but that is seldom convenient. What I don’t get is why HDR Effex doesn’t allow the manual tweaking of alignment. It does seem to make some effort to align so I’m guessing it would be a smallish step to make that available the way some other apps do. I hope they do get around to it.

Hi Andrew,
I checked my archive. The first version of HDR Efex Pro (NIK Software) dates back to Oktober 2010 (!)
and the manual already explains about ‘Alignment’ and ‘Ghosting’. But not being a fan of HDR (there was a lot overdone that time) I hardly used this tool.
Then, I remember a friend used photomatix, but no idea, how that works. Maybe check FAQ & tips on HDR photography software Photomatix

Someone else here recommended Photomatix. I hadn’t heard of it before and I’ve downloaded it now but not installed the trial yet.

I’m also not a fan of that kitsch, artificial-looking HDR some people do but I need HDR and I have a long, ongoing frustration with it which you might relate to if you use an ultrawide lens a lot like I do. Unless you shoot away from the sun, an ultrawide means you have an ultrawide gamut of light that your camera has to deal with, and that’s not just a matter of getting the sun in your field of view. Even if you shoot sideways from the sun, you end up with a very wide gamut of light and an image that is light on one side and dark on the other. I actually shoot into the sun quite a lot because I need shadow in my beach calligraphy work. I also have my work in the foreground and that ends up a mere silhouette if I expose for the sky. Fiddling with big gradated filters on the 14-24mm on a windy beach are joke and I can’t afford a whole new Nikon mirror-less system so I’m stuck with HDR just to get a pleasant, natural-looking result. At the very least, I’m exposing for the sky and then using gradated masks and control points to recover the foreground.

The ocean in the background is always moving so I got my hopes up when I saw HDR Effex claimed to handle ghosting and then my hopes were dashed on that basic problem of there being no way to tweak alignment.

Anyway, you have my hopes up again with Photomatix!

Ghosting is usually handled quite well with Photomatix. Check their website and tutorial videos.

Hi guys, has anyone been using affinity presets for their photos? I recently started with this free preset bundle 24 Free Affinity Photo Presets You Just Can't Miss Out

Do Affinity presets work in DXO?!

Do Affinity presets work in DXO?!

No - - but you can export a TIFF from PL to Affinity, for further processing therein (tho, I’m not sure why you’d want/need to do so ?)