Having trialed the software and watching several tutorials I thought I might make a purchase and checked out the DXO website. Well it seems to purchase Photolab Elite, Filmpack Elite and Viewpoint it would cost a whopping $407.00. That just seems a bit much to me. Guess I will probably do another year of LR Classic. I think the software is very efficient and offers a lot but at this time the price just outweighs the value for me.

Check here: https://shop.dxo.com/en/photo-software/dxo-photo-suite
And yes, get the elite edition. Saves you a later upgrade.

The link to the $289 USD offer for the Elite version of the suite is probably the best deal you will find, and for me, it was worth every penny. I’ve been using it since November 2017 and have never regretted it for a moment.

One thing I don’t get, why VP not part of PL Elite period, every other software as this tool with them, PL is the only one I know who doesn’t include that. I can understand for film pack, if you’re looking for effect.

It was at the start (until Optics pro 10) and were separated to keep a low price to PhotoLab.
In the end, the DxO suite is the same price that others software.

One thing I don’t get, why VP not part of PL Elite period, every other software as this tool with them, PL is the only one I know who doesn’t include that. I can understand for film pack, if you’re looking for effect.

I generally agree there should have been at least some basic functionality built into PhotoLab Elite. However, remember that Viewpoint is also a standalone application as well as a plug-in and as such it can be used by non Photolab users. As an example in the past I used Canon’s Digital Photo Professional software (DPP) for much of my post processing work. DPP does not have any perspective controls and the Viewpoint stand-alone app would have been very useful.

I for one purchased VP when it became a stand alone/plugin. Since then I have built up my DXO applications to the elite editions of DXO and Film pack when affordable. If not for that method I doubt I would have ever purchased the full blown application.

I makes more sense to have them modular. This way they are affordable and can be used as plugins for other applications.

Or one can do as I did, buy all three when the whole suite is on sale.

Most of the VP functionality is already built into PhotoLab so you don’t really need it unless you have some specific functional subset you need. I have it, and I use it occasionally, but almost everything I do can also be done directly in PL.

Most of the VP functionality is already built into PhotoLab so you don’t really need it unless you have some specific functional subset you need. I have it, and I use it occasionally, but almost everything I do can also be done directly in PL.

I mostly use the VP functionality in PhotoLab, rather than the stand-alone software, but you still have to purchase VP to get that plug-in functionality. Without it there is no perspective functionality natively built into PhotoLab Elite.

When you buy the suite, you get DPL, VP and FP plus a substantial price reduction.

Buying the Elite edition saves you from missing a few things like clear view, individual profiles, preset editor and partial presets etc. Note that film pack and viewpoint are included in the suite. 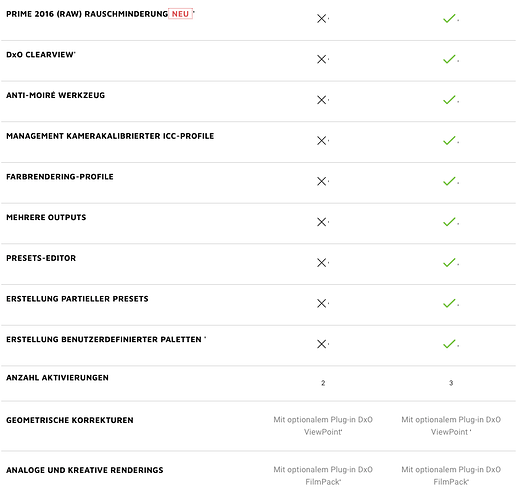 I can understand for film pack, if you’re looking for effect.

That’s the problem it has also some important contrast functions.
i bought it more because of the other functions rather then film emulations.
Imo they should intergrade all not film-emuations functions in the elite version and migrade the rest in a raw compatible NIK collection package

When Nik will be really taken over by DxO (will act with PhotoLab), we can ask the question the future of FilmPack.

That’s an other frase for total rewritten in same language as PhotoLab.
I realy hope they can and do.
As more people are stating its a good strong point of view to make the present “suite elite” a new standard.
Photolab Elite including VP and Filmpacks core correcting tools.( some emulations like monochrome/sepia/silverlook/ oldcolor.) But not those bleeding light, old postcard, scisseld edge things
DxO Nikcollectioncan then be the new plugin/standalone for those who realy need those toolset.
Make the Nik “the extended” set for DxOPL which Filmpack now is.
Viewpoint is a buildingblock for PhotoLab not a addition imo.

But then again i am writing for my use and not for commercial benefit or strategic product placement which DxO should do.
Ofcoarse as a plugin for Adobe applications and standalone still availble.

These suggestions would mean that the software, either as a new purchase or as an upgrade, would be significantly more expensive for those of us who do not need or use Film Packs and for whom VP is an optional add-on. Why add to the cost of software that is already expensive when most people don’t need or use either?

These suggestions would mean that the software, either as a new purchase or as an upgrade, would be significantly more expensive for…

No i ment if you look at Filmpack elite and separate the global sliders as in contrast advanced and some other tools which you get if FP is activated are migrate to the core PL without any raise of money.
Let FB be the filters list and gadgetstoolset.

Viewpoint toolset is fairly a coretool in a raw developer application thus needs to be inside the PL Elite without any doubt, (maybe the auto modes is a extern and optional)

Don’t forget that if you want to make bigger user base you have to apply a complete rawdeveloper in elite version to compete with others.

edit: And for those whom like to use only DxO’s optical corrections and primenoise before a other application or uses it " inside" LR as plugin : “DxO Optical elite”
No local adjustments or advanced tone selection or contrast things, only lens sharpening, denoising and optical correction and as a plugin VP3 You see lots of possible options for re-selling modules