Thank you, It’s a dark forest picture and I didn’t have a chance to make SS longer to freeze the moment, thats why it’s so noisy. Thats why I need good denoise

Hi everyone! Has noticed some AI artefacts (very high ISO and short SS) in Denoise Prime XD. It looks like in Topaz when software adds details did not exist.

I have seen that too.

You on windows with a Nvidia GPU by any chance ?

Are the artifacts gone when in the preferences you force deep prime / deep prime XD to use CPU only ?

You are not the only one. I find it adds ‘texture’ in some areas of smooth colour, such as in the light pollution of a night sky.

Was my finding as well. Other Denoise AI software sometimes very clearly ‘makes up detail where there was none’. If the detail generated matches your expectations, you go ‘wow this is awesome’. But if it does something completely weird, you think ‘what is this ?!’. (For example, a dark smudge on the chin of a 4 year old child was seen as ‘probably facial hair’ and got hairs / beard drawn into it. Completely goofy but absolutely not correct of course !)

What I liked about deep prime was that it was safe to use , artifact free. Something you could always leave enabled , specially when in a hurry.

Deep prime XD seems to be a bit (tiny bit) more like other denoising AI software , in that it tries to make up stuff that isn’t there. It’s still subtle , don’t get me wrong. But a few times I’ve looked at a file and went ‘no that is not right’.

Together with the issue that it’s not working on my GPU, so to use it i have to go to preferences , make a change, restart PL6 then render the file out about 29x slower compared to deep prime with the GPU enabled … I basically forget about it.

Which is a shame ! Because if they tweak it a bit to be as reliable as deep prime , it would be nice to have :).

I am on Mac with Radeon. I don’t feel this kind of artefacts is caused by GPU configuration. It works like every AI I have seen, sharps details and redraw them in certain circumstances. It looks good when lost details are good predicable, but falls apart, when options are not monosemantic.

I was ‘hoping’ that I finally found someone else with the same issue I am having (I appear to be the only one or something…): DeepPrime XD weird artifacts

But mine are just not ‘detail’ artifacts… it’s clearly corruption going on somewhere, so I guess it are two separate things. 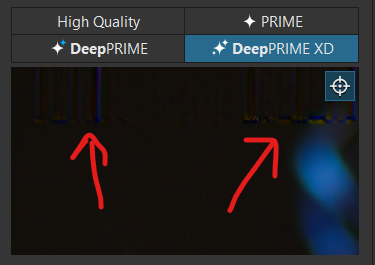 I have the same glitch

It sometimes shows as a bunch of rainbow colors (like a patch like 50% size of the preview window of deepprime, but full of rainbow stuff… nothing like detail or photo stuff…) 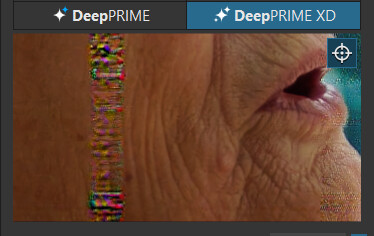 If it seems really glitchy, try with CPU only.
If it seems ‘made up AI detail’, I’m doubting if it’s an artifact…

Yes it happens with random colors but I think this bug is not related to AI-algorithm odd redrawing details.

It’s still subtle , don’t get me wrong. But a few times I’ve looked at a file and went ‘no that is not right’. 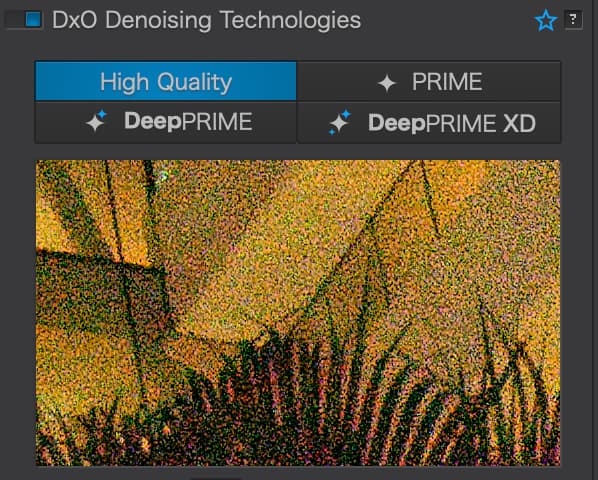 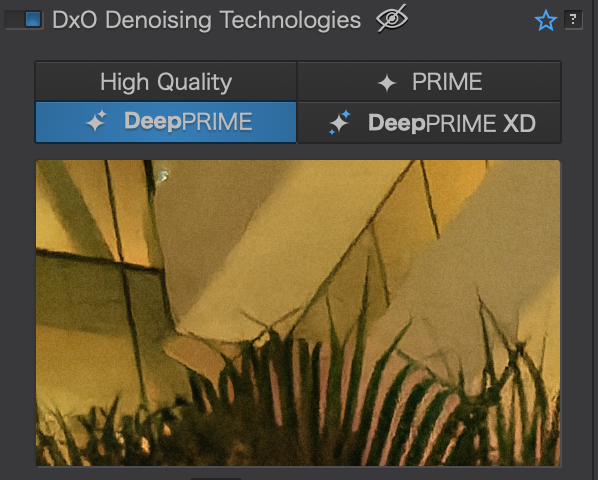 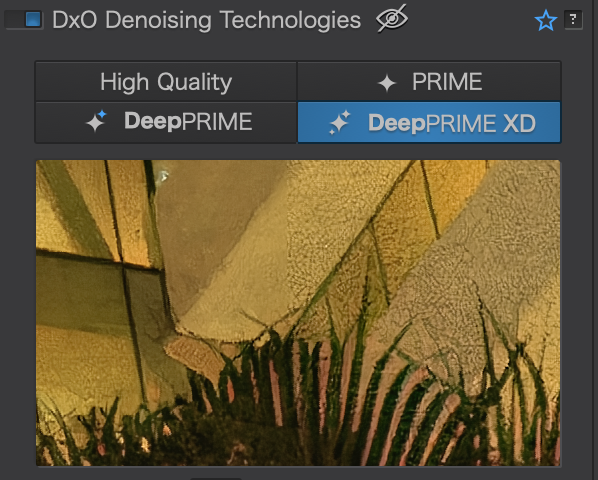 Do you have some kind of CPU, and did you try with cpu-only mode?
I don’t see the colourful artefacts I see, but that seems so weird, that it’s split in the middle like that.
Almost seems like the right side receives no noise reduction or something.

But yeah, that are the ‘AI denoising’ problems I recognize from tools like On1 NoNoise and Topaz… and I’m not used to from DeepPrime.

And no, what you show is not subtle at all… but I haven’t encountered something like that yet, to be honest. But also, since I get rainbow artifacts in GPU mode I hardly use it

Seems like we might have to stick to DP for some time. XD seem to give some more detail but we also seem to risk unpredictable unwanted artefacts.

I’ve said it before — if not in this thread then another — that XD absolutely has its uses. It’s just not a replacement for DeepPRIME in the same way that DeepPRIME was for PRIME.

But it does worry me that, while “invented texture” is arguably to be expected when trying to wade through high noise levels, XD has some completely unnatural tendencies like this abrupt vertical line which has no basis in the original image data. 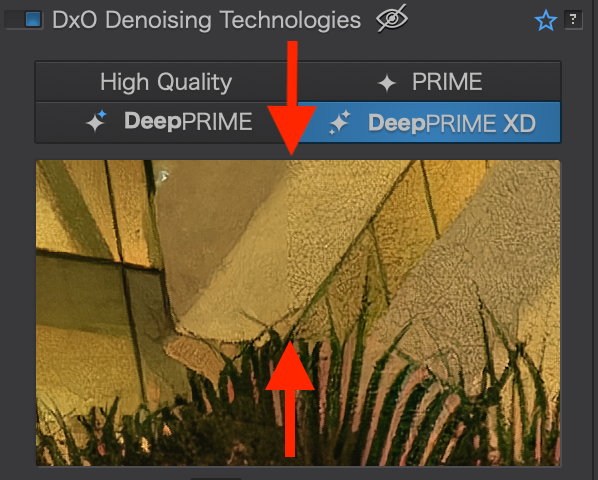 XD has some completely unnatural tendencies like this abrupt vertical line which has no basis in the original image data.

That’s a rendering problem in the mini viewer surely, rather than a fundamental failure of the XD algorithm? Is it there in the exported image?

I have no more rainbow artefacts and other streaks while trying DeepPrimeXD on the GPU.

(Note, this means that for me the differences between CPU mode and GPU mode seem to be gone… I guess artefacts created by the algorithm for real won’t be resolved until DxO fixes it…).

which lists DXO Photo in the release notes

edit 2:
just realized, that I’m in the Mac section – sorry for that

It’s like what is on the left of that line XD has decided is noise so it’s smoothed it out and what is to the right it’s decided it should have texture. Strange when you look at the original though that it’s come to that conclusion. I’ve found that standard DP does this sometimes as well, just not quite as extreme as XD.

I guess it is treating the images in smaller patches, and each of the patches are treated individually.

That’s a rendering problem in the mini viewer surely, rather than a fundamental failure of the XD algorithm? Is it there in the exported image?

Yes it’s there in the exported image.