I’ve not at all been a fan of PRIME when it came out because it made things look like plastic. The current incarnation is much better, thank you.

Coming from film era photography, I usually reintroduce some noise into the PRIME’d images because it seems more natural.

Good point about retaining a natural look within one’s image. When I use Prime (sometime I prefer Fast NR not to save time but because it leaves some high ISO grain in the image which can look more natural - this is on Canon images and it depends on the original ISO and original exposure level, on a per image basis), I usually dial it way down to 12 from the 40 which is default. Noise reduction remains plenty strong, even at very low levels but that artificial/synthetic look diminishes.

I’ve just tested this on a .cr2 image. Even with Prime dialed up to 79 PhotoLab film emulations are available and visible. I would be very unlikely to use the Adox Color Impulsion grain in a real project - but wanted something very visible. I thought the order of the filters in the sidebar would matter. No, even if I move the Grain effect ahead of Prime, the Grain remains visible and untouched by Prime. 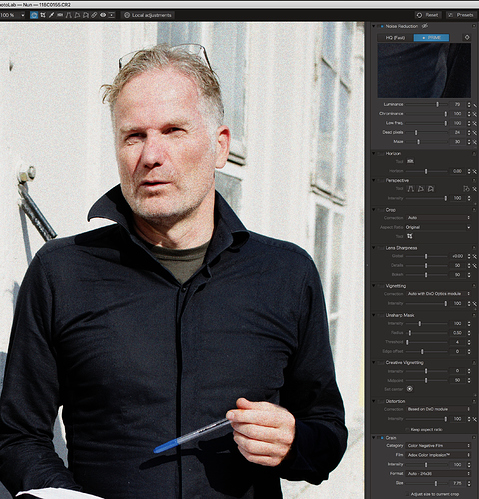 Got drawn to this post by a link (thanks for that Alec) and now i am intrigued.
-PRIME is eager to lose grain so in that aspect i follow Platypus words.
Adding on purpose grain and then export will let PRIME give the opportunity to remove that again wile exporting to Jpeg or tiff for that matter.

No, even if I move the Grain effect ahead of Prime, the Grain remains visible and untouched by Prime.

Could this be because the grain is not random placed?
(i know PRIME is doing its work before the mosaic-filter where rawdata becomes RGB-pixels) So i think DxO engineers are applying the filter after the transferring from raw to RGB-pixels same as other local corrections like healing. That’s why the filters are still untouched.
Grain caused by sensors ISO value is inside the raw data and also before using mosaic-filter so that grain is “attacked” by PRIME.

Grain caused by sensors ISO value is inside the raw data and also before using mosaic-filter so that grain is “attacked” by PRIME.

From my test it’s very simple. Prime NR works on sensor grain of course but does not touch grain added by the Grain panel. So there’s no issue adding grain with either PhotoLab or in Nik.

I don’t like the idea of roundtripping to Nik or anywhere else with PhotoLab. First, PhotoLab is a RAW development tool and not an image manager or a particularly efficient pre-web or pre-press prep tool (exports are very slow). Second, trying to keep track of when PhotoLab filters would be working on the image or not would be quite difficult.

What panels should work on an image which has been roundtripped out of PhotoLab. If grain was applied in Nik, surely that grain should be reduced by Prime NR by default?

PhotoLab can only keep track of the changes it’s made. For really granular management of a sophisticated multiple layer cascading set of changes one needs the grouped layers of a tool like Photoshop (incl. CS6), Affinity Photo or Gimp.

I can’t imagine how unusable PhotoLab would slowly become if one applies sets of filters before and after each roundtrip. This kind of addition will make the interface too complex and the processing too slow. One has to make decisions in software and adding every feature and every possibility just makes unusable applications (anybody like a side of RAWTherapee with their PhotoLab?) which is why only programmers enjoy Linux on the desktop.

If someone does want to add roundtripping to PhotoLab in a serious way, the way to do it is in fact multiple sequential tabs for the filters applied after each round trip (why should it only be possible to roundtrip to one external application and not four or five). Roundtripping is really a deep rabbithole though, adding very serious complexity to the back end of the application. It would be difficult to add without crippling performance. The existing panels and filters can already slow PhotoLab down to a slow crawl on larger RAW files.

If grain was applied in Nik, surely that grain should be reduced by Prime NR by default?

I don’t think so, Nik is working on the Tiff made by DxO and Prime is then already gone over the image
So after getting tiff back DxO doesn’t apply prime again when export a jpeg.

Second, trying to keep track of when PhotoLab filters would be working on the image or not would be quite difficult.

Keeping track of which filter is used also. (for future purposes, to use again)

I can’t imagine how unusable PhotoLab would slowly become if one applies sets of filters before and after each roundtrip.

I think it’s more simplified: it applies all filters you activate when export to application and it makes a Tiff fully processed including the filmpack grain filter. or if you want nik grain decativate filmpack grain export to nik add grain, export to dxo and make the jpeg or edit some more on that tiff. No prime involved, only the other one HQ NR. ( maybe that one needs to be off.)
(i did a two steps test with HQNR of DxO free optic 11. and loaded the DNG into Silkypix and that noise reduction didn’t reqocnise the grain which was left as noise. So denoise don’t work twice in raw developers programs. only Dfine2 of nik does a good job.
I tested this with Prime default (40%?) and Define2 against prime on 80%. So yes Define would ruin your added grain. (i think)