I have some Huelight DCP profiles installed. In the folder they are in they are in order, but once added to PL4 they are shown randomly listed. This makes it difficult to select between them I can’t rename them as photos using them can’t find the profile used for them. Is there some way of getting them into the correct order?

On Mac, the color rendering tool remembers five recently used .dcp profiles.
Sort order corresponds to the sequence in which the profiles were (first) used.

I’m windows and think it is different from Mac, again. The list shows everything and doesn’t change as you use it.

This may be another difference indeed. To make sure that we’re talking about the same thing I put up this screenshot:

The part with the highlighted profile above the line has limited memory, the import item just below the line shows all profiles within a folder - by name as I had selected for the screenshot

Yes that’s why I am talking about. It may be I could delete them and reloaded them and see if they ramdomise again.

They don’t randomise. as @platypus has already said, the list you see is the last five profiles used. Use a sixth one and one of the existing ones will disappear from that list in favour of the new one.

Have deleted and reloaded and all are in the right order this time (have to scroll down to see them all,). Will see if they stay in order. Think Mac and Windows differ as tried a few imiges and list so far the same order and all showing still 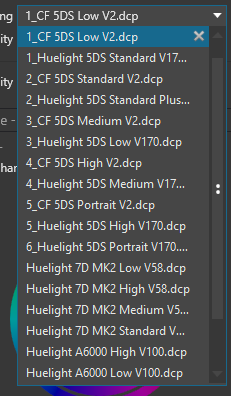 It didn’t help I now know not to have renamed each DCP by camera and type of dcp. Then when there were updates again renamed them the same and replaced the old ones. By adding the updates with their original names I created the problem that I had to keep the names and to prevent problems with processed images.