I might be mistaken, but I seem to remember that @StevenL mentioned in a number of posts from 2020 or early 2021 that he’s been compiling such a list for the team to work on bringing both versions of PL to feature parity…

If you add to them it’s easy to keep a record of differences!

Indeed, nothing more recent comes to mind… So you’re right, might as well help them out a bit!

There is a repair toolbar that appears under and image when in local adjustments repair mode on the Mac but it does not appear in the PC version. PL4 Elite

Moin,
my reminder in 1800 days is not over yet, but with this great forum it goes by itself.

I first noticed the not inconsiderable differences between the operating systems when I bought my MB1Air. For many things I had blamed it mainly on the MacOS/Win peculiarities. But when I installed Affinity Photo on the Mac, I saw that it can work, at least in large parts.
What makes me sad is that we have been discussing this for so long and that, despite many suggestions, such a comparison list is not provided. The issue of the translations of the menus could also be solved more quickly if DXO would provide an Excel list or CSV list of all the menu items in the different languages so that the native speakers could have a look at them.
Somehow the procedure with the FRs, adaptations and translations should be professionalised if we as a forum are already providing so much input.
For me as a user, this is all exciting, but in addition to my normal work, photography and image editing, I don’t want to become a developer as well.

Before the bashing starts again…the forum, the members, the staff of DXO is all really great, but if you look at the posts in the last months you really get the feeling that some things are not really taken seriously. I at least would welcome to continue working with a great software in the future, which is further developed with the forum members.

Allways good light to all

DxO could offer PhotoLab as an appliance running in a VM. Only question: Which VM…

If the question is serious, you could install Parallels for Mac and get the Windows ARMs64 Insider Preview.

When I have a lot of time again, that’s at the top of my list.

Do VMs have access to the GPU? Workout GPU it would be rather slow with DeepPrime.

Hi Keith,
I’m not sure about because on Windows I use the free VMWare Workstation player and this one has some restrictions. But for me it’s ok because I use it only for testing new software, or in case of Windows 11 for new operating system versions.
I would never test on my production machine.

For those who only have a Windows computer or only a Mac, there is no real way to catalog differences. It is only when following along with webinars/videos that you realize they are showing something in the Mac version that does not exist in the Windows version. Quite disconcerting.

But we don’t give up
“Wir brauchen einen Putsch, oder war es ein Punsch?”
It doesn’t sound so well in english than in german “We need a coup, or was it a punch”

In a similar vein, in French “On a besoin d’une vedette ou une vedette?”
Do we need a movie star or a speedboat?

Good to hear. I use Windows Pro which has its own built-in virtualization Hyper-V.

Dear Keith,
I know because I also own Win Pro 64bit, but in the long history I used virtualization Vm has had more advantages. Maybe this time the gap isn’t that big is was, but it’s not possible to run Hyper V and VMware on the same system. And so I am still using what I know

I know because I also own Win Pro 64bit, but in the long history I used virtualization Vm has had more advantages. Maybe this time the gap isn’t that big is was, but it’s not possible to run Hyper V and VMware on the same system.

Hi @Guenterm, you will find Hyper-V will be more efficient as it is a type-1 hypervisor whereas VMware Workstation is a type-2 hypervisor. 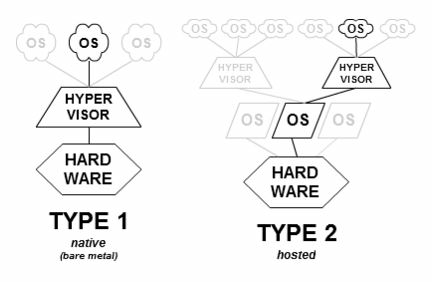 The image above shows the difference. Try it out if you like as you will find it very similar to VMware. Have fun as it is free!

Hi Keith,
sounds good…maybe I will be start testing during the long, cold winter month’s

The difference I found is a drop down menu “Select item to display” in browser is sticky in Win version. It also appears whole.

That means, you open the filter menu, click an all items you want to show/hide and you are done. Mac version displays only first three items and closes after each selection. When I want to show photos with single star rating only, that means I need to open the menu 5 time and scroll down. Then I delete these photos, and when I want to display the photos that have three stars and more. I need to go to the menu 4 times again.

It is similar if you want to delete “rejected photos” first and then switch to “picked”.

I have to say, this drives me nuts. LR has these filter directly in the browser, where you can click&drag. Win version has at least sticky menu. 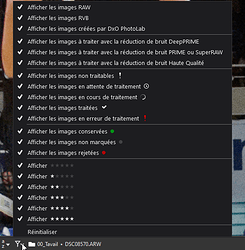 I have to say, this drives me nuts. LR has these filter directly in the browser, where you can click&drag. Win version has at least sticky menu.

… and in Windows you have the same with [ A - Z ] Sort images.
You click on it and it’s ‘gone’ without letting you check, if the chosen option is the right one.