Delete image from PL-5 after editing?

Let’s say I have completed editing two images within PL5-Elite and have sent them on to another program for further editing. I am now left with those two images still in PL’s image strip. I would now like to know how to delete these images from PL and leave the PL’s image strip blank? It’s not that I want to completely delete the images from the PC, just want a “fresh” PL.

You could use the Filter option in the Flimstrip to only show Unprocessed images.

PL only shows the files it finds on your disk. When you say you “send” an image to another app, I presume you mean you export it, at which point, you create a file in a different folder on your disk. Since PL is a non- destructive editor, the original image file, together with its DOP sidecar file will remain, in case you want to make further virtual copies and different versions.

The only way totally to “remove” files from PL is to delete them from your disk. But do you really want to permanently delete your original RAW files?

I would now like to know how to delete these images from PL and leave the PL’s image strip blank?

deleting them within PL also clears the database

Right: Send=Export. Correct, I don’t want to completely delete the RAW files. I like Paul’s suggestion about showing only unprocessed images in the filmstrip…I’ll give it a try.

Good idea. I’ll be giving it a try.
EDIT:
Thought I knew what I was doing, but not sure. I found the Filter (hourglass at bottom left of Customize), but not sure if this is “the” Filter and if it is, what do i do next?

Adam,
If you click on the downward pointing triangle next to the filter you should get a list of filters you can apply to what is shown in the filmstrip. Note you can select multiple filters within a subset, in which case they are OR’d e.g. 1* OR 2* rating, and multiple filters across subsets, in which case they are AND’d e.g. Unprocessed AND RAW images. This latter one might be helpful if you are exporting to the same folder as the original images - assuming your originals are RAW files, and the exports are, for example, TIFFs or JPGs, then Unprocessed will “remove” the RAW images you have already exported and RAW will remove the resultant TIFFs or JPGs of the exported images.

See the image below (this is PL5). 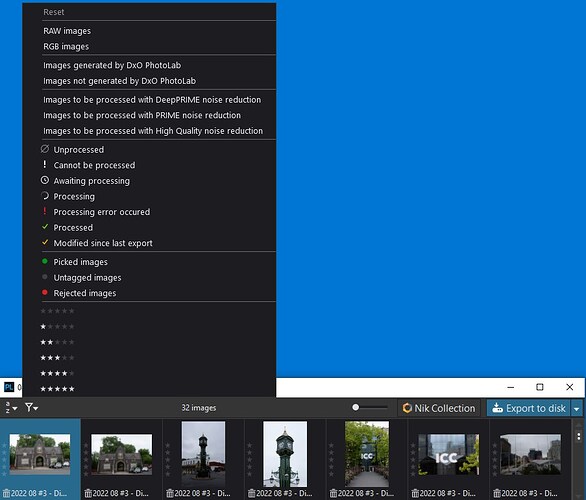 Thanks, Paul. I chose your suggestion (Unprocessed and RAW), and sure enough, when I finished editing and sent the image to another editing software, the filmstrip image was deleted from PL-5. The edited PL-5 image appeared in Photoshop Elements as a .tiff (as directed) and in the file’s original folder as a .tiff (as it should). Bottom line, the processed file was deleted from the filmstrip and sent to where it was directed to go to.

Now let me ask, which combination would just keep the processed .tiff in the filmstrip?

EDIT: Although that combination worked to remove the images from the filmstrip, I don’t think that I’ll be using it. With this combination, RAWs can’t be initially loaded onto the filmstrip. So, I think I’ll just go back to not checking any Filters…unless, you can give me a combination that will allow RAWs to be loaded and all to be removed when finished exporting.

Why would you spend time editing and perfecting an image, only to delete all that work and have to start from scratch the next time you want to make a print or even export the image for the web or to send to someone?

If you don’t want to see the original thumbnail, why not export to a sub-folder of the the original and then switch to that once the exported file is there?

I don’t loose the edited image as it was already exported. I think I was just trying to be a little too “neat.” I now realize that I needlessly took up your time with my question. On further exam, I see that when a new image is sent to PL’s filmstrip, whatever images that were already there are removed. For whatever reasons (probably old age,) I was under the impression they remained. Nonetheless, I am extremely happy with PL-5. And, thanks to all as I did learn some stuff.

Sidenote: If an image is not shown because of how filters were set, the image is just not shown. It is not deleted, neither from the drive nor PhotoLab’s database…

I don’t loose the edited image as it was already exported.

You may not lose the edited and exported image but PL is a non-destructive editor and never changes or replaces that image.

On further exam, I see that when a new image is sent to PL’s filmstrip, whatever images that were already there are removed.

Would you like to clarify what you mean here? There is no way of “sending an image to the filmstrip” the filmstrip only shows the files that exist on disk in that folder. The original image always remains unless you deliberately either overwrite it or delete it.

I should have said: Sending an image to PL. which would then appear in its filmstrip.

How do you “send” a file to PL? It only knows how to display end edit files it finds on the disk. What are you “sending” the file from?

Obviously, I’m sending my RAW file that is located within Faststone to PL, or to my other editors. Simply done by right clicking the mouse on the image (file) within Faststone, choosing “Edit with external program,” and then choosing one of the four editing programs I have therein listed.

But you are not “sending” a file anywhere. The file stays in the folder where you transferred it when you took it off your camera’s memory card. From there, Faststone allows you to open that file in PL5, but the file doesn’t move from its original folder.

You may think that, but the fact that PL is working on the same file in the same folder that Faststone shows it means that you can’t delete the original file, which seems to be what you want to do

No, I never wanted to delete the original file. I was just thinking it would be nice if after a RAW image was edited in PL and then exported to another editing program, that the RAW thumbnail in PL’s filmstrip would then be removed from the filmstrip but not from its origin.