I compared Deep Prime XD to Topaz Labs DeNoise AI. The results are fairly comparable in my opinion but there is a HUGE difference in speed. DeNoise is about 4-5 faster than PhotoLab. One of the things I noticed DeNoise was doing was using both my CPU and GPU concurrently. While PhotoLab just uses my CPU. My GPU is an Intel UHD 620.

I’m not sure if that Intel integrated GPU is supported. Go to Preferences and click on the performance tab. Then under Deep Prime Acceleration click the dropdown menu and check to see if your GPU is listed. If it is then click on it and restart PL6. Now it will use your GPU. If it is not listed in the dropdown menu then only CPU acceleration is available.

The Intel UHD 620.is a lower end integrated graphics solution with no onboard memory. It was released in 2017. It has a recommended gaming resolution of 640 x480. Its performance is far below the minimum GPU that could support DeepPRIME and DeepPRIME XD processing.

The Intel UHD 620.is a lower end integrated graphics solution with no onboard memory. It was released in 2017. It has a recommended gaming resolution of 640 x480. Its performance is far below the minimum GPU that could support DeepPRIME and DeepPRIME XD processing.

Good morning Mark. That’s what I thought, but wasn’t sure so I thought I’d give it a chance.

Good morning Mark. That’s what I thought, but wasn’t sure so I thought I’d give it a chance.

I use Techpowerup.com. for graphic card information.

Here is the page for the card I’m using in my current Windows desktop, the Nvidia GTX 1050Ti which is on the lower end of what is acceptable for DeepPRIME and DeepPRIME XD processing. acceleration. However, it meets my needs.

A new driver for my card was released recently which decreased processing time by 1/3! The 21 megapixel raw files from my Nikon Z fc now take 14 seconds to process using DeepPRIME and 34 seconds to process using DeepPRIME XD. There are very significantly faster speeds achieved by newer cards of course, but the timings with my current configuration are still quite acceptable to me.

I got my graphics card just before the beginning of the chip shortage and was able to get it for under $200! A couple of months later that same card was over $400!

Here is the page for the Intel UHD 620 graphics chip.

Thanks Mark. I wasn’t aware of that Site. Very useful info to be found there. Bookmarked for future reference.

A new driver for my card was released recently

Do you know specifically which nvidia driver version introduced the big boost?

Do you know specifically which nvidia driver version introduced the big boost?

I’ll check when I get home. However, it is not for every card. It mostly sped up several older cards I believe. What card do you have? When was the last time you updated your driver? There’s been one or two updates since the one that speeded things up for me. I know that several other people at the time reported a similar increase in performance with other older cards. Newer cards, which are much faster anyway, don’t see any significant increase in performance.

Prior to the updated driver, DeepPRIME XD processing took around 51 seconds, It now takes 34 seconds. And, DeepPRIME previously took around 21 seconds. After updating the driver the same files take around 14 seconds. For me there was exactly a 33% speed up in processing for both.

I’m running a newer card. A 3070 based laptop.
When I saw the news I upgraded to the latest driver and my speed went down by about 10% but it’s still very fast.

I can tell you, that the 3070 is not one of the cards that the new. driver sped up, as you apparently have discovered. I am surprised that the latest driver slowed your card down.

((copied from a single post in another thread)) For the past year or so (beginning with driver version 5.11), NVIDIA has been working to implement a vastly-improved OpenCL/CLANG JIT compiler internal to the drivers. This was an end-user opt-in post-install configuration choice for “power users” until the most recent release of the driver packages. There is some (minor) information available on this in the NVIDIA Driver release notes, section 2.5.3. Beginning this week with the release of driv…

You are all missing the point of this post. Topaz Lab DeNoise is able to utilize both my CPU and worthless GPU to generate comparable results to Deep Prime XD 5X faster.

I tried topaz and I had to fiddle too much with the adjustments to get good noise reduction that didn’t create artifacts and different images required different settings to do that.

Given all the time I’d be spending adjusting, processing 100 images with topaz would take way more time for me.

Feel free to use topaz but it’s not for me.

You are all missing the point of this post. Topaz Lab DeNoise is able to utilize both my CPU and worthless GPU to generate comparable results to Deep Prime XD 5X faster.

I doubt that Topaz is making any use of your GPU. If you had a more modern computer with a top quality graphics card, DeepPRIME XD would run faster than Topaz. Those of use with modern cards in fast machines process XD in just a few seconds.

Topaz is faster, but on very noisy files such as this night shot of the Miami skyline shot by forum member Mike Myers at 12k ISO, Topaz is NOT comparable to DeepPRIME XD. 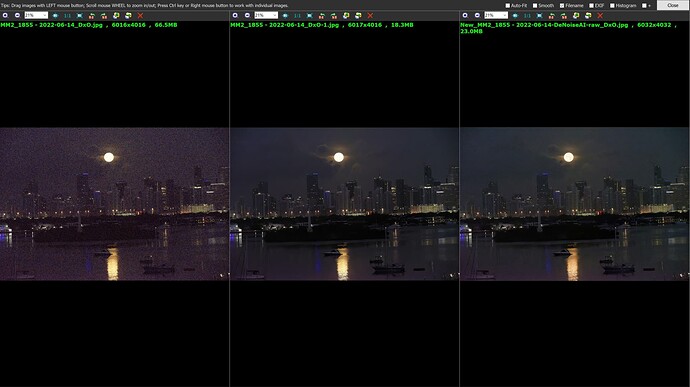 Second screenshot: Some of the buildings in the middle, as viewed at 300% 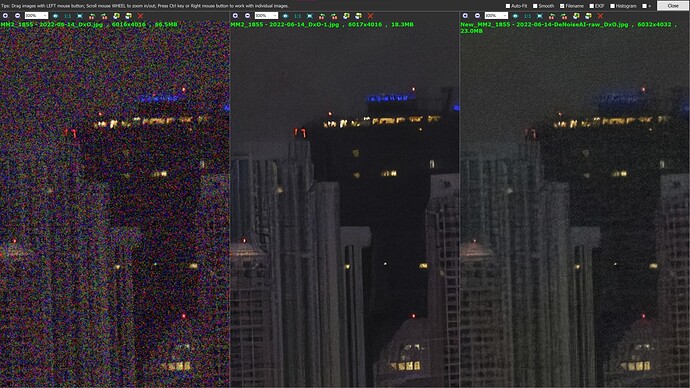 Third screenshot: The bright building at the bottom right, viewed at 300%. 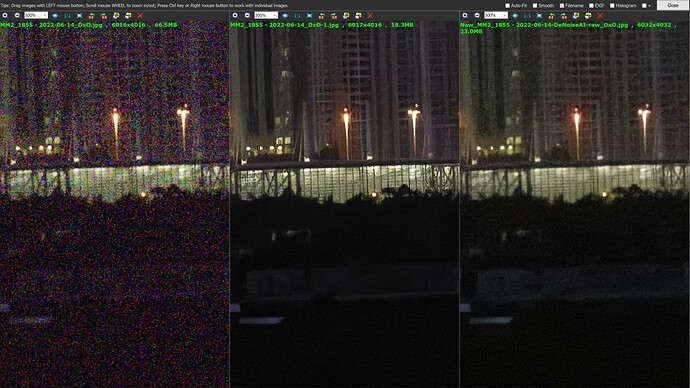 DPXD clearly removes more noise(check the file sizes in the upper left corner of each frame, all other things being equal, the larger the JPG file size the more noise there is in the shot).

Also it is clear that DPXD retains more detail. DXO Photolab is clearly the better product and worth extra time involved in waiting for DPXD to export. Grab a cup of coffee!

I never said DeNoise was better. I said it was comparable

My point of this post is to try to get DxO labs to actually use my little GPU like Topaz does.

I never said DeNoise was better. I said it was comparable

DxO will never use it because it is far too primitive to provide the necessary muscle to process DeepPRIME and XD. I doubt that Topaz is using it either, but even if it did, the amount of added processing power would be negligible at best. Using your CPU would provide better results. I am sorry to say this, but if you want to get the most out of current high end post processing software you need to purchase hardware to support it. There are AI related features in many software titles today and they all require robust graphics cards. Yours is simply not up to the task and wishing won’t make it so.

Sorry but the Intel HD/UHD is a 6-7 year old integrated graphics GPU. It contains no optimizations for the kind of work being done here and this work is best left to the CPU in this case.

And if you’re upset or looking for DXO to invest in code to split the work between your old CPU and your old integrated GPU because that GPU is so old and slow that’s really not a good use of their time.

Seriously. Go on eBay or Craigslist and buy a 3-4 year old dedicated GPU card for $20 and speed up your DeepPRIME processing by a factor of 10 or more. Or buy a modern GPU and speed up DeepPRIME by 100x or more.

Seriously. Go on eBay or Craigslist and buy a 3-4 year old dedicated GPU card for $20 and speed up your DeepPRIME processing by a factor of 10 or more. Or buy a modern GPU and speed up DeepPRIME by 100x or more.

I don’t know if he’ll be able to get something compatible with his computer for that kind of money, but I certainly agree with the concept. However, if he has a laptop he may not even be able to even install an upgraded card in it.

Unfortunately, he seems to believe that DXO’s lack of support for his onboard graphics chip is just a marketing decision. The reality is that DxO could not make his Intel UHD 620 run DeepPRIME XD faster than his computer’s CPU regardless of how many resources they put into the task.