Dear DXO Staff, when can we use Photolab for Nikon Z9 raw?

I also think it will be the most productive way in the short run to target the converter manufacturers. They can easily address this problem as we have suggested in no time - read the next release.

… but, I’m not all that sure DXO is paying any attention even to these discussions in these treads we are writing in DXO Forums. If they had been on the toes like Camera Bits yes but Photolab is not a matter for Kirk Baker at Camera Bits. If it had this issue had been fixed a long tima ago.

I still think we have to get an industry standard format - DNG or not. I have also had problems with DNG - that lossed data completely in clipped black but that was maybe 15 years ago. DNG has also showed to be a fantastic RAW-format in Enterprise DAM-system i have worked with earlier and if other software manufacturers than Adobe’s have had problems implementing importfunctions it often boiles down to just the same control mechanisms as DXO has imposed on us in Photolab of different now highly dysfunctional reasons. They have imposed these controllogics and are the only ones that can take them away.

A common RAW-format is needed to get an end to this enormous waste of R&D-resources tied up in these nonsence activities around the never ending stream of proprietary RAW-formats.If the converter developers would have just one single standard format to relate to instead of many houndreds this should be a non issue.

Oh what a “toy”-industry this is with it’s protected work shops!

Something that is taking months to accomplish while other software is already using it is hardly the next day.

If there is somebody who wants to try a working macro that changes one camera version code with another in the HEX Editor “HxD”, I have a working makro now for the macro recorder named just “Macro Recorder”. The free version has a limitation at 10 files at the time but you have just to wait a few seconds to run it again or pay yhe price for the full version. The macro is resonably fast if you empty the check boxes as in the dump below. 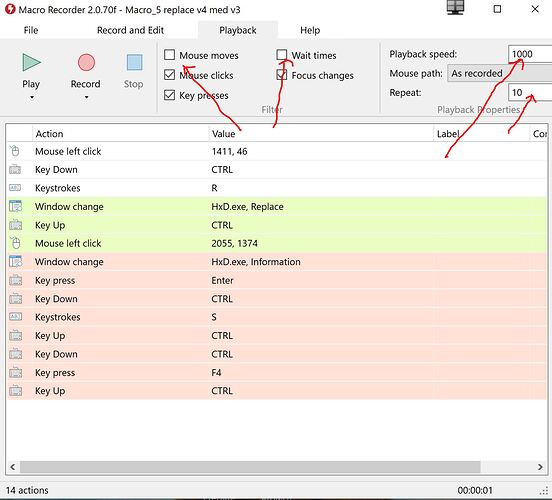 Make sure the first row of the script is selected when you start.

The only thing you need to do before you start is placing the HEX editors window in the upper left corner of your screen and open the HEX Editor HxD:s “Replace”-dialog and type in the values of the camera codes (look in one of the respective files) in the editor first so you get it right.

Then place the open Macro Recorder -window to the right of the Editor, import the macro file and open the paly back window and fill in the speed and repeat values before testing running the macro. Start with a small sample of say five files in a separate folder first.

You might have to change the mouse positions x - y numbers in the Macro Recorder if it doesn´t work for you since it´s relative. The position of the “Mouse left click” shall be in the middle of the “Replace all” button in the “Replace”-pop up dialog. 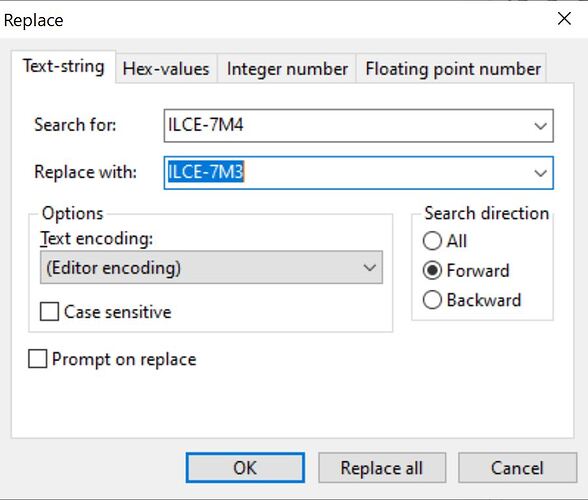 I have tested it myself on about 70-80 files yesterday that I switched from ILCE-7M4 to ILCE-7M3 several times back and forward to optimize the script and clear it from wait states of different kind. Than I processed the images converted to ILCE-7M3 and it worked fine for me. The experince developing didn´t differ anything to developing ordinary files from my A7 III.

I didn’t mention that I have a Z9 in pre-order (not delivered yet), and I’m astonished that after spending over €600 with DxO over the years, I’ll not be able to process the files. I’m one of the few to consider the changes in PhotoLab 5 significant (allowing more control over masking and the Control Line are huge improvements for me), but between DxO not making PhotoLab 5 available for Mojave and DxO not making camera profiles available in a timely way, I have the feeling that whoever has grabbed the reins at DxO in the last few years has little respect for their paying users.

Good choise of an exiting new Nikon camera. Then I´m afraid you soon will end up in the Raw Flaw swamp too.

I miss Michael Reichmann a lot too. He was one of the exceptions among photo journalists, from the general lax habit of dancing around the center pole. A guy with integrity and great knowledge - always intresting to read.

March, that is way too long, and what if it means end of March another two month. Yes they wrote me back, that it takes time, and therefore it is better than all the rest. Yes, I love DXO, and I have brought a lot of people to use it, based on my recommendation. But if I go, I will not come back, and so will many others, regardless how good it is. This is all just ignoring costumer needs. I am very sad about all of this. And I am a Mac user so HEX Editor HxD seems not an option for now.

No problems(?). Even if there always has been lots of applications Mac users couldn’t use because they just were written for the industry standard platform Windows, there just has to be lots of alternatives for Mac users too. Just pick another one of your liking. The need to read Hex code is not limited to Windows users, is it?

I don’t know, I reader do not tinker with the files. I use now LR and Topaz. Well, and it is working ok, a big change, but what the heck. Wird verarbeitet: _WNP5216-Bearbeitet-2-2.jpg … First results not too bad.

It is strange that DXO has not commented on this thread … as a minimum a good indication of a target date for Z9 support would be expected. Give us some idea when we can continue to use Photolab. I switched from LR many years ago and like Photolab, but I also have several shoots coming up with my Z9 and I need a solution better than NX Studio (even though ok for minimal editing but to slow for more) …

here is the response from DXO: When will Nikon Z9 be supported? - #19 by jee

Based on the above thread, I applied a workaround today - which is ok for a few photos or with a possibly with macro - see above in thread - which I have not tried yet.

I used HxD and the replace function to replace the string “NIKON Z9” with “NIKON Z7”. There are two instances in each Z9 raw file which I changed. This allowed me to launch the raw file in Photolab 5 which treats it as a Z7 file. All good - editing works as normal and quality seems good. Photolab even prompted me to download profiles for Z7 and my lens combination.

I have only shot my Z9 with Full Lossless Compressed so far (in anticipation that this would be the easiest format for software providers to sort first). Indeed LR and C1 already have this ready. I have C1 on 30-day trial, but so far prefer the Photolab 5 outcomes and that is the workflow I am used to. Hopefully DXO get full support for Z9 soon! At least for Lossless Compressed as a first step as it seems to work fine based on the Z7 profile.

I have used the workflow with HxD amd “Macro Recorder” (as you can see above at message #23) extensively the last weeks. I think it works very well and I don´t feel especially frustrated now over the fact that DxO has been so teriibly slow to give us a working profile for my A7 IV or your Z9.

Try the script and the Macro Recorder by yourselves if you feel manual work in HxD will ger too frustrating. You might need to change the x-y cordinates on the sixth row of the script that you can download above.

… and don´t forget to mute the computers speakers otherwise you will probably get mad because all the “plings” that will trigger.

The Nikon Z9 is now listed with some lenses: 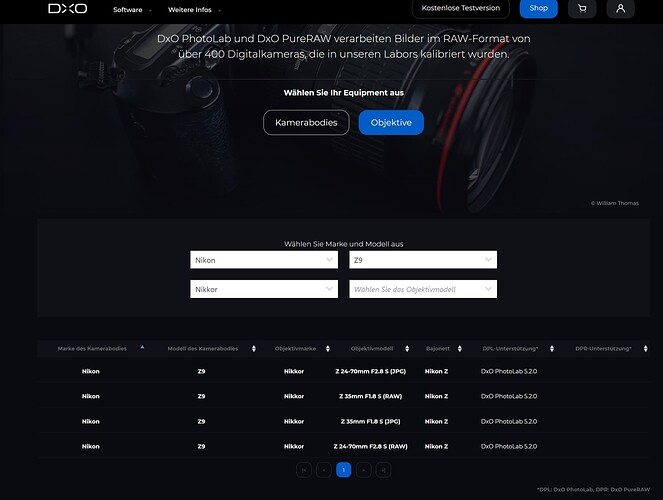 Now you have to wait for the release of PL 5.2

That should be any day now.

I have used the workflow with HxD amd “Macro Recorder” (as you can see above at message #23) extensively the last weeks. I think it works very well and I don´t feel especially frustrated now over the fact that DxO has been so terribly slow to give us a working profile for my A7 IV or your Z9.

For those who are on macOS, there’s an even easier solution to make batch changes to a set of photos to allow PhotoLab 5 to edit Z9 files as Z7 II files. It’s called MetaImage and it’s very easy to use.

MetaImage also works to change iPhone 11 Pro DNG photos to iPhone X designation and edit them. I’ve tested with DNG photos from iOS 13 and have not tested with iOS 14 or 15 yet.

You can buy MetaImage for $3 on sale now along with some other useful software (out of what’s available in the current Award-Winning Bundle, I own and recommend Little Snitch, iMazing, Typinator, HazeOver, Cookie, Forkflit, EagleFiler, DropShare, TaskPaper; others I’m trying include from this bundle include FireTask Pro, OwlOCR Pro, PhotosRevive).