Correction of palettes are enabled automaticly

@Joanna
Probably PL initiates the variable with a number 5400 to be sure it’s numerical. I think. That should be replaced with the actual temp. It’s just not done in a elegant way.
The difference between the manual in-camera wb and the wb in PL I can’t explain. I just didn’t investigate that. I don’t know what is written in the exif. Probably PL is just calculating it by itself and means “as shot” based on the raw data and not camera setting. Try an extreme different manual wb in your camera, let’s say 10000, and see what PL does.

The default value of the WB Temperature slider = 5400°K, but as you know it’s the correction which is calculated individually for each image based on the calibration - that is why you see 5510K for your image. Unless you question is why it’s not 5600 as set in the camera. In this case we need an assistance from @Marie.

On further investigation, using Exif Editor, in the advanced camera data, the WB is simply marked as 1, which appears to be the equivalent of “Daylight” or 5400.

Using Apple’s own Preview app shows Nikon specific data of 5600K, but this is obviously not read in either Exif Editor or DxO.

But nowhere can I see any reference to 5510, which is what DxO ends up showing.

In PhotoLab and in other photo softwares temperature displayed in user interface doesn’t correspond to setting of cameras.

Reasons of that are:

About White balance presets:
In photo softwares temperature and tint displayed are just a scale to help adjustment. So, in PhotoLab, temperature/tint have been fixed for presets displayed. So when processing images from different cameras there will be no discrepancies.

About temperature and tint:
PhotoLab, as any other rawconverter, use White Balance given in Exif. To be accurate it uses White Balance scales (coefficient to apply in rawconversion to get same white balance as camera).
In camera profile we have white balance scale for all preset given previously (cloudy, tungsten, …).
So when a photo is put in PhotoLab it looks to white balance scales, apply them and do a calculation to estimate temperature and tint associated compared to scales in camera profile. This calculation is specific to any rawconverter that’s why every converter from different company will provide different temperature / tint associated to an image.

I hope that helps you.

Open an image, change the temp to 10000. When you diasble raw (you mean WB?) you’ll see the image with the temp “as shot”. Does the temp info change to?

This is exactly what I’d expect.

Anyway, for the fun of it: Temperature displays from different Apps: 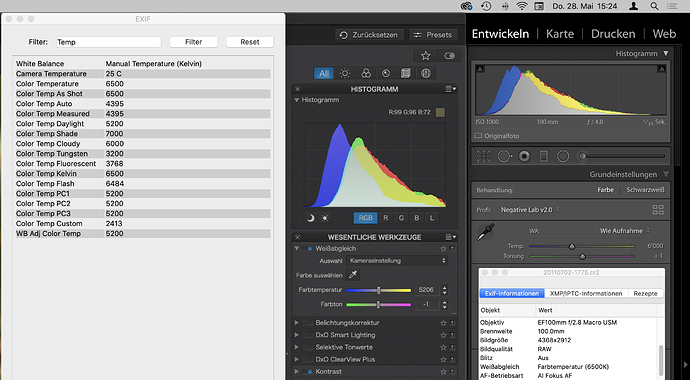 RawDigger and DPP show temperature as shot to be 6500K.
PhotoLab and Lightroom show whatever they show.

Just tried. D750, set the temp manual on 10000.
In PL opening first time temp 5400, enabling raw temp 10014. Small difference.
Difference between Johanna and me is that I set the wb to manual. IView mentions manual in the exif.

@Marie
And what about the discussion about the initial value of the wb when raw is disabled?

As Svetlana already said “The default value of the WB Temperature slider = 5400°K”.

Or maybe I don’t understand the question.

@Marie, as far as I’ve understood @George, the pain lies in the fact that the default value of 5400 does not go away when images are switched.

Maybe it’s also about language, many of us are not native English speakers…
For translations, I have found that deepl.com did a fairly good job when I used it.

it’s not possible to get precise temperature/tint applied by a camera at shoot when a white balance preset is selected because cameras adapt WB even with preset and in litterature only range of temperature are given.

I can understand that for the presets but, what about when you select a temperature manually? Which is what I do, to the extent of not just choosing one of the “steps”, but dialling in the exact temperature. I use 5600°K and would have hoped, since it is written in the EXIF, that it would be read.

Given that this exact temperature is available in the manufacturer’s data, couldn’t/shouldn’t it be part of the camera profile?

The main problem of this discussion is that PL suggests that Raw wb can be disabled. It just can’t. Trying to do that is something as going up the ladder without a ladder.
The picture I see when I open it the first time is a picture with a color temp “as shot” but the info tells 5400. The 5400 is not used.
From what I understood from Platypus the value is overwritten with the used color temp on a Mac. I can’t check that, but that would be the right way. And it isn’t on the win pc.
In the example of Guentherm on a win pc PL shows the image with a color temp of 3381K but the info says 5400K. Only when enabling, whatever is meant with that, the value is updated to 3381 and stays like that, also when disabling again. The picture doesn’t change, the histogram doesn’t change. Only the info changes ones from wrong to right.
The shown value isn’t updated in the beginning where it should be updated. On a win pc anyway.

In the example of Guentherm on a win pc PL shows the image with a color temp of 3381K but the info says 5400K.

Only when enabling, whatever is meant with that, the value is updated to 3381 and stays like that, also when disabling again. The picture doesn’t change, the histogram doesn’t change.

On my Mac and using the preset “No Correction”, WB is disabled and displays WB according to camera settings. When I switch to a new image, WB goes to 5400 for a split second, but does not do it any more, once that DPL has calculated the previews in the background.

Absolutely the same behavior on Windows.

That’s not the same behaviour on my 2 win pc’s.

I’v made the checks multiple times with different photos and DXO behaves as it should.

The same behaviour as with me although we may disagree about what should be.

May I conclude that on a Mac the 5400k is updated to the actual used temp at initialization but not on the win pc.
And that when I see a temp of 5400 then that’s for nearly 100% a wrong number?

Here is the behavior on Windows:

We have a little bit different algorithm from MAC - as I wrote above the slider is updated with each image re-selection.

The same as with me. So one of us did misunderstood Platypus. Question: who of us?

Hello, the video of Svetlana shows exactly what I’ve tried to describe with my 1 to5 steps.
So maybe platypus can also describe with steps or film what is wrong.
Regards
Guenter

Playing with the tool.
Opening an image as before.

This tool shows the image always as as shot when disabled. When enabled and you change the temp the setting changes to one of the other possibilities and the corresponding temp. When disabling the image is shown as as shot but the setting and temp in de window doesn’t change and are related to each other. And that is not the situation at opening. The 5400 should be overwritten with the as shot value.

For Step 1 maybe its not nice, but isn’t incorrect…because
If something is disabled, all subvalues are defined wit whatever parameters (default values DXO developers decide to take.)
This behaviour you will find also in software nothing has to do with photos
Only my opinion

Again, on my Mac, WB works as I expect.

With the WB tool disabled

With the WB tool enabled and set to Camera Settings

While it is an interesting thing to know how DXO works under the hood, I don‘t understand why anyone wants to disable the WB panel instead of having it enabled and set to camera default when when working on RAWs. I tend to tweak WB a bit on most pictures and never would disable this panel. For me it is as fundamental as exposure.

I don‘t understand why anyone wants to disable the WB panel instead of having it enabled and set to camera default when when working on RAWs.

It is interesting to be able to disable the WB tool for partial presets. This allows partial presets to work an image while leaving WB alone. This means that you can set WB early in your workflow and later apply a (partial) preset that will not disrupt that early step.