Contest: Can PL be used to simulate lighting from flash for portrait shots ?!

I thought I had scrolled to the bottom but I’ll try again. Thanks John.

I just don’t get why anyone would want or need to do that. It sounds more like a challenge for a 3D modeller. What ever happened to “get it right in camera?”

Gary F was, essentially, posing the question: “Can the computational features of smartphones (and post-processing software) produce results as good as photographic techniques - such as speed-lights?” … with a “fun” challenge for his readers to try.

Note: He’s a serious photography writer (Cameracraft magazine) and author (of manuals for Sony cameras); also an inventor … He’s quite an interesting bloke.

Again, why choose something camera phones do actually have to then take away?

But never mind me. I’ll be over here on my lawn chair.

Hi @John-M
to my mind, Friedman’s contest is not worth the effort ( still tried ).

As already said, the photo to be edited is horrendously unsharp (1/6 sec, f2,8). But then, taken with room light from ‘behind’ results in a person’s dark front instead of a more even lighting.
And using a super wide angle lens quickly results in unpleasant disproportions (compare both hands
of Danny Brodsley as well as his right hand with his face).
While the pic of Leon Levitch ( The Friedman Archives Blog: Classical Environmental Portraits ) seems to be taken with the same lens, him holding both hands close to his body, the distortions are less obvious and distracting.

To note, both finished photos are ‘photoshoped’, but compare the nice soft lighting in the pic of Leon Levitch with that much harsher one of Danny Brodsley. – Friedman must just have been pulling out some old stuff, while in lockdown. 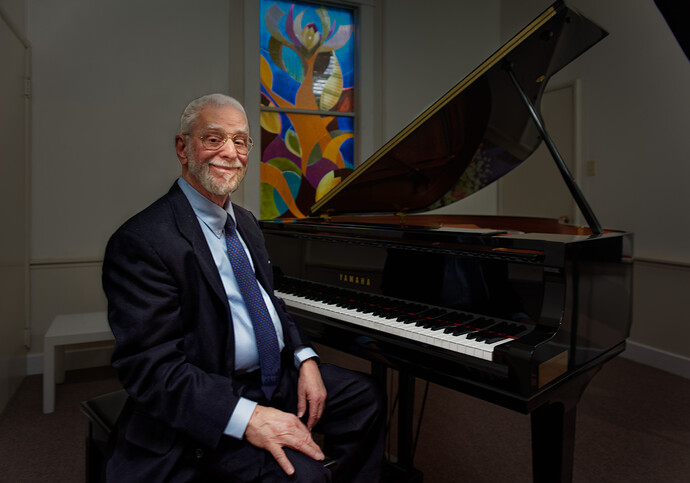 Not very good, but here’s my attempt. 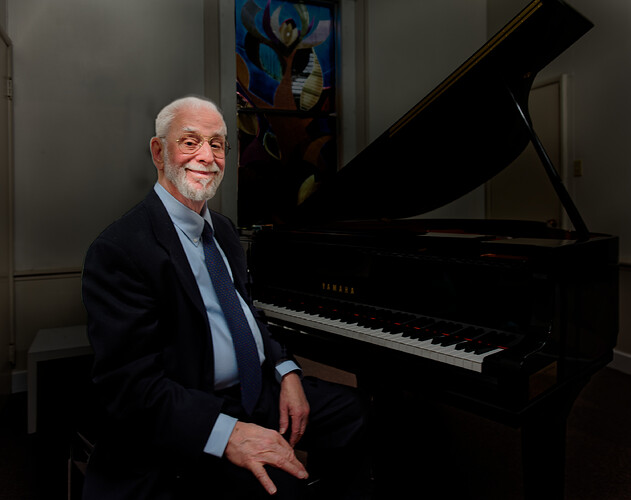 @rrblint & @Wolfgang : Thanks for giving it a go, fellas.
(Yes, I agree there are quite a few issues with this base-image … but, I guess it is what it is !)

You both did a much better job with the light on his face than my effort.

Q: What did you use to remove the “red” colour-cast on his face ?

Inspired by efforts of @rrblint & @Wolfgang, I had another go … I reckon this is quite a bit better (than my 1st attempt); 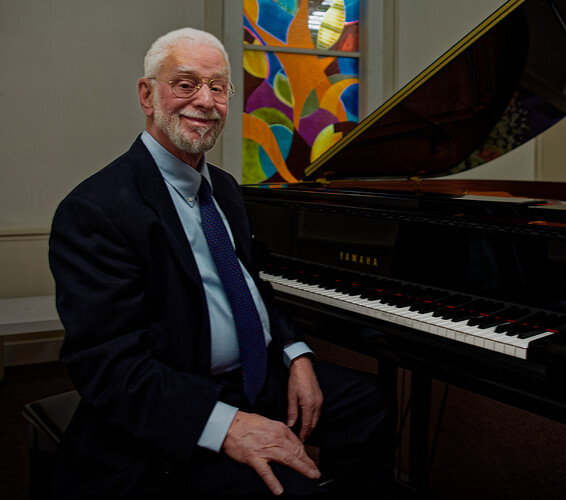 That’s very close John good work! I don’t remember doing anything special to get rid of red in his face, I just darkened his right side with a control point, but yes I may have removed a little bit of vibrancy too. I really don’t remember, getting old is so much fun.

@john-m
Yes, much better now – you put more work in this one.

Like @rrblint, I also didn’t change any colour. Suppose, the reddish tone appears stronger with a darker face.

Straightening the pic and working with so many Local Adjustments became really tough. It took long to load the pic and ages with LA active.

When correcting masks manually, it happened several times that I moved the ‘start button’ by mistake and so the mask – quite annoying. And next time I’ll use less CPs.

What I don’t get, how to remove the top right black corner. I tried with copy and repair, but never get a clean replacement. Does it have to do with touching the edge of the pic? No problem to repair something as long it doesn’t touch the side.

So, for me it was a training about what can be done in PL. Normally I do dodge & burn in PS and therefore use a Wacom tablet – difficult in PL.

Yes, much better now – you put more work in this one.

Haha - Yes, true. But, it took the example of you & Mark to prove to me that “tilting” the shadows on his face was do-able … and, so, that set me a challenge I had to try.

What I don’t get, how to remove the top right black corner.

When the part to be replaced/repaired is close to an edge, I’ve found it best to mimic the edge positioning with the source (rather than taking the source from an “open” area) - all the same, I still had to crop a bit from top and RHS to get rid of some “shadows”.

Once again, thanks to you and @rrblint/Mark for “having a go” at this. I reckon it was a good learning experience.
I’ve sent mine off to Gary, with explanation that I’m using PL - hopefully, that may pique his interest.

nah, PL is not developed enough, not even trying! For instance if you want to lower the exposure of the image and using a local adjustment to turn back exposure to normal, you will not get the original color/exposure, no matter what you do. There is no other shape than round so you painstakingly have to paint the oval shape you need for proper perspective adjustments (like light spots). Otherwise I’d image you’d need to do a couple of gradients opposing each other, just to put different temperatures (a flash is normally coldish).

but never get a clean replacement. Does it have to do with touching the edge of the pic? No problem to repair something as long it doesn’t touch the side.

This is also a frustration I regularly encounter. It seems to sort of bring in blur from outside the image. It helps if you reduce feathering on the mask but you can never quite clone out a thing on the edge.

For instance if you want to lower the exposure of the image and using a local adjustment to turn back exposure to normal, you will not get the original color/exposure, no matter what you do.

This is something I’ve come up against too. I regularly shoot more or less into the sun on the beach so I expose for the sky to avoid bleached-out highlights. My strategy in post is to up the exposure to get the foreground right and then put a gradient on the sky to bring it back down but it is always a struggle to get it back to where it was. The values aren’t the same. If I up exposure compensation by 1 stop and pull the sky back down 1 stop with a gradient it doesn’t go back to where it was before exposure compensation - always much darker. It’s not even close. So although the gradient slider gives numbers that purport to be in stops they don’t actually match in value.

Why do you expect to ‘see’ flash light?
– Indoors, the illumination (atmosphere) rarely is ‘cool’ and the piano keys are white.
But, I reduced the shady skin tones’ saturation for a more realistic look (HSL tool to simplify).

Any time, I prefer the nice soft lighting in the pic of Leon Levitch
(The Friedman Archives Blog: Classical Environmental Portraits)
to the harsh (amateurish) lighting of Danny Brodsley
[no studio photograph here, but it’s just not the best example to follow].

my feeling is that in the local adjustment, instead of the exposure to be increased, when using that slider (exposure), is just turning up the shadows.
I tried to trick the software by using the artificial vignetting with local adjustment that increases exposure but same issue, maybe even worse. A fake vignetting will apply over all your adjustments.
[update] with regards to the sun: normally you shoot to have the sun right and not the shadows. Why? because a raw picture can recover easily 2 or more steps from the shadows and rarely more than 1 stop from the highlights. I had excellent sunsets (in the highlights) with 0 shadows that I recovers perfectly after turning it up. It’s all about the light available in the landscape - if your eye tells you there is easily enough light to see all, there is, so it’s just a technical matter with your camera. I must say, mine is 10y old, almost, and it’s a good one (5dM3) but the new ones, OMG, how wide their dynamic range is, so it should be even easier. On the other hand it’s awesome to have great contrast and colors by exposing more. If you do landscape, HDR is the answer.

yeah, I checked yours and they didn’t look great on my computer, so no, I don’t think it’s possible with the PL. As Beachscriber said, you need to lower the overall exposure and keep and improve the rest for the focus area and PL has a problem there. Still downloading you get a PSD file, which is potentially much more powerful than PL was meant to be. I mean yeah Adobe brings some of those features into LR nowadays, and PL should incorporate them, but I expect all kinds of the layers over layers in PS (might as well be magic!).
Would be cool if PL would have some kind of export to layers in other software, like Pixelmator pro or others. I use Pixelmator Pro as a good replacement for PS (I thought the best PS was version 6 haha, so PP is already much better than that).

@arthography
Friedmann put up a contest to ‘meet’ a photo taken with one flash / softbox, which when compared to the image of Leon Levitch shows harsh lighting and unpleasant light fall off. While both finished files are obviously ‘photoshoped’, there was not so much effort in Danny Brodsley’s pic.

In the Brodsley set he quickly demonstrates the differences between room light, camera coupled front flash and decoupled flash – a teaser for his online course. To ask to mimic the flash light and provide the ‘contestants’ with an horrendously unsharp poorly lit pic, is quite bold. But that’s the scenario ‘we’ are in.

Now, the question is not if we like the pic, but if it’s possible to re-lighten an image taken in such poor light. ( Of course it is not, not in reasonable time. ) And then we are here in a section about Photolab and not PS et al. – Yes, I would like the integration of pixel editing capability and layers, but it’s not there.

Even if it turned out that PL is not the appropriate tool, we tried what can (could) be done. Wether the results are satisfying is a another (important) question. – Do you show us your solution (and how to) ?
Wolfgang

Now, the question is not if we like the pic, but if it’s possible to re-lighten an image taken in such poor light

The answer is partly as follows, @arthography/Ioan …
(In case you missed my edited addition to my earlier post, above). I submitted my attempt to Gary Friedman - and received the following response:

That’s pretty good endorsement of PL’s capabilities for me !

If I had to, I’d vote for this version. Would be interesting to see/get the sidecar.

Other than that, solving this problem in DPL feels like driving a nail with a screwdriver. It can be done if you happen to have forgotten the hammer, but you’d certainly not want to do it as an everyday job.