In HDR efex Pro 2 it is possible to compare the image where you applied modification with a reference image given as output of the merge.
The base comparison give two options, default tone mapping and middle exposure. Do you prefer one over the other, is there concrete use cases that justify the need of those two options?

Thanks in advance for your feedbacks.

Which version of HDR Efex?

I was refering to HDR efex Pro 2

Sorry, missed that… How can I switch between the two references? Found no hint of it in the user guide either. I have HDR Efex Pro 2 version 5.0.4.

Thats means first that it’s not really an used feature

. When you do the comparision of images you can go to history and then select the different base comparison options. By default it’s default Tone mapping. 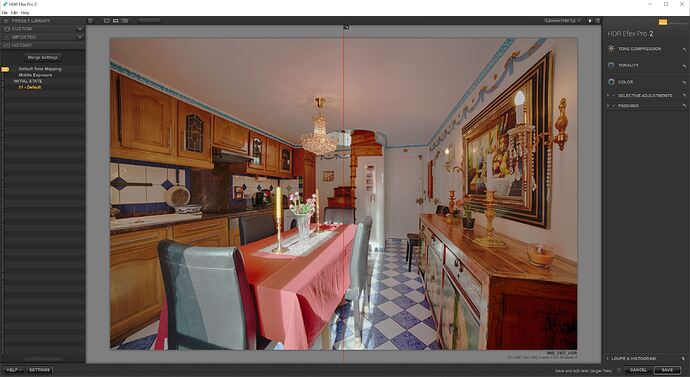 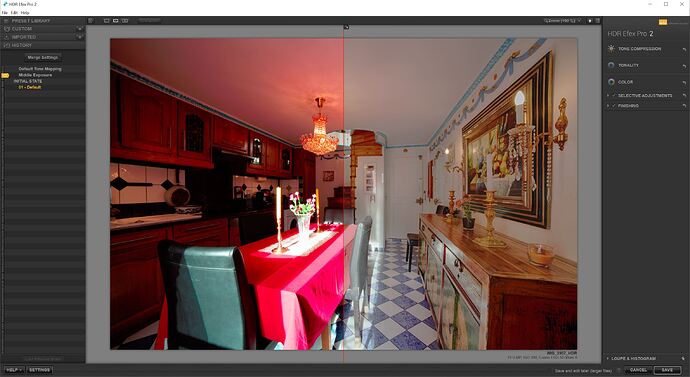 I see that I can’t vote for both options. While I haven’t been using HDR Efex Pro for some time (due to serious bugs I’ve reported), I would like to start using it again and believe I would find both comparison options useful. “Default tone mapping” would let me see the effect of my own modifications of the default baseline adjustment in the history, while “middle exposure” lets me compare with an unadjusted image in the bracketed set (or, I presume, the original image if only one exposure is used) to see if more contrast might be needed or if any detail is being lost. Between the two, I’d find “middle exposure” more useful, but wouldn’t want to lose “default tone mapping” unless what is meant by that becomes moot. I hope that helps. I didn’t vote.

The thing is the middle exposure doesn’t use just one image but a composition of the images. So it already apply something. That’s why I don’t really see the usage of it and ask for the use cases.

Ah, that’s different from what I’ve read about it.

go to history and then select the different base comparison options

I hardly ever use the history (used to, but came off it a few years ago).

Tested the feature and found that might be of greater interest:
As long as comparison is inactive, history steps cannot be selected, because the respective slider is absent. In order to give the history some use, I propose that the history always show the slider. 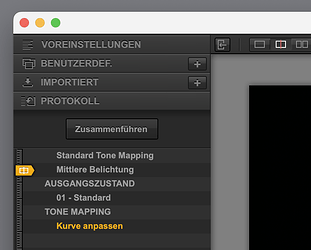 As for the vote: I’d have to test thoroughly…but I usually do my HDRs in Lightroom. HDR Efex Pro is of no special value for me, although it has a nice features like e.g. the possibility to change exposure for input images, something that Lightroom does not offer.

I gave up on HDR Efex Pro a long time ago.

Serious question does anyone use it regularly in preference to Affinity Photo, LR, or Photomatix Pro?

No I don’t use it

Nope. Own Nik but never tried HDR efex. Used to use Aurora HDR but have switched to SNS-HDR. Don’t do HDR very often though.

I’ve yet to find anything better for my needs than Photomatix Pro, though I’m not always happy with it since its emphasis is on the painterly/surreal look. HDR Efex Pro can be good for realism, but was so buggy/broken the last time I used it and has very limited abilities. In most cases I tried, the starting presets were useless - so yeah, perhaps those comparison options are useless as well after all. I really hope DxO keeps gathering feedback and improves it in the coming year. Thanks!

Especially took a bracketing serie to test.
→ This functionality has to be VERY well explained

I tried several times, like I do when trying to find out …
The left side got bright(er), but the saved result was just the same as default, so

the saved result was just the same as default

…absolutely identical, too! While it can be nice to have a protocol, what good is it, if we cannot use it to branch off from an older point in time - at least it was not doing it when I tested.

using Nik since it was NIK (long before Google went for Snapseed), but I’m no HDR lover really …
This is what I found HDR_2_Kurzanleitung-Dateien.zip (2,0 MB)
=