As well as the previous Crash-behaviour I’ve documented elsewhere Nik apps now incorrectly display photographs with what appears to be the wrong profile, while in the app. I use a 2017 MBP as my workstation with an Eizo CG241W as my main screen. If I detach the Eizo, the Nik apps correctly display the image in-app on the MBP. But, with the Eizo attached the images appear super-saturated and tonally wrong. I have the Graphics Card disabled in Nik apps, and have experimented with all sorts of combinations of settings to trouble-shoot the issue, but without success. The mis-matched image occurs in the standalone apps, in the Lightroom plugin and the Photoshop plugin. Both monitors are regularly calibrated and profiled with an X-rite i1DisplayPro. The MBP is profiled with X-rite i1Profiler software, the Eizo with Eizo Color Navigator. I assume that the Nik software is picking up the incorrect monitor profile from somewhere. It isn’t assigning the incorrect profile to the processed image so it is limited to a viewing issue while in the app. Obviously this makes judging adjustments in Nik software completely useless. Given that we are days away from the updated Nik collection, can the developers confirm that this issue, along with my previous post, will be addressed? I’m happy to beta test on my system if you want some detailed response! I’ve attached a screenshot showing the difference between the standard rendition on the left (in Lightroom) vs the Nik super-fruity rendition on the right 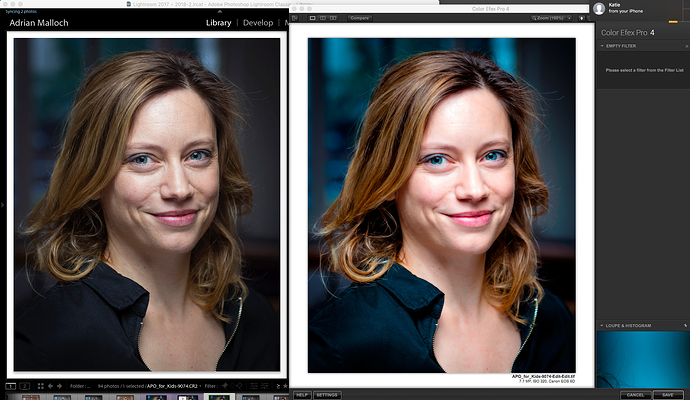 Thank you for the report. I’ve addressed it to our Developers.

as I have a late 2016 MBP (new model 13" with TouchBar) and an external screen (BenQ SW271, 99% Adobe color space), I’ve made some tests to check if I can reproduce Adrain’s issue, and yes I have the same issue, but I have it also on the MBP screen when BenQ is detached from MBP.

Like above, the image is reddish in DxO Nik, tried with Color Efex and Analog Efex.
Below a copy screen with Viewer (it’s the same in Photo) and Analog Efex with no correction as seen on the BenQ: 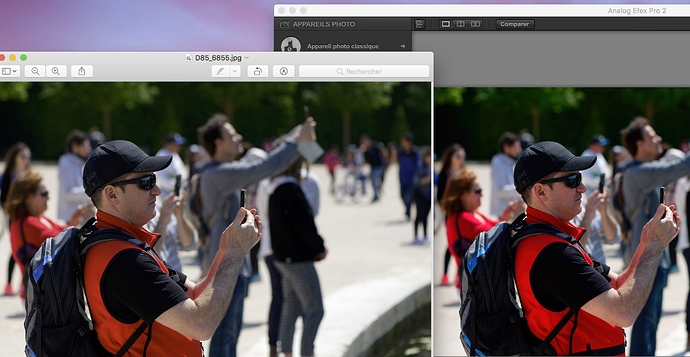 The image is a jpeg coming from Photolab with Export color as Original (From Nikon NEF with sRGB) so sRGB as defined in exif.

I have the monitor arrangement set up in extended desktop mode.

The colour problem only shows on the Eizo

This is only a recent issue. It first started about 10 days ago but I can’t figure any change that might have caused it.

The monitor profile location had always been in the User folder so when the problem happened I also tried locating them in the System Color Profiles folder but that didn’t correct it either.

My theory is that the Nik app isn’t finding the correct monitor profiles or some reason.

Is there any way for me to generate a log file of what the Nik app is doing, that might be useful?

And now after extensive testing with different monitor arrangements, newly created profiles and disabling of some features I’ve not managed to get rid of the issue except in one specific instance.
That is, when I use a very old REC 709 D65 2.2 profile, created for video editing, the problem is resolved – no colour or tone difference when viewed in the Nik window!
I have attempted to make that same profile using the same inputs but so far, none of them works correctly.
Monitor profiles have been created with both ICC version 2.2 and 4.4 (a common workaround for software/profile mismatches) but that approach didn’t create a usable profile.
Also, I have found that my MBP screen does indeed display photos in Nik software with a higher saturation look. I missed it the first time because the effect is subtle.
As well, for the first time, the MBP screen is (despite my earlier evaluation) displaying differently to the Eizo in ways it hasn’t done before.
So, this could be some more system-wide issue with profile management than a specific software interaction.

Yes, I think that may well be the same sort of problem Pathal.
Is this a new issue for you – that is, has it behaved correctly in the past with your system, or is it that you have only just now noticed it?
Also, do you use a hardware calibrator to profile and calibrate your monitors?

I just see it recently as my BenQ screen is very new, and I’ve seen it because I’ve tested regarding your issue with the same kind of configuration.
I can’t say it’s new or not as I’ve not much use Nik until now, so I’ve never compared color rendition from various softwares.

Yes my 2 screens are calibrated with Datacolor Spyder 4.

We reproduced the bug on our own, thank you for your reports !

I am very thankful and excited that DxO updated the NIK Collection. I have missed it.
My prior workflow of using smartfilter with NIK on a round trip from Lightroom broke a few versions ago. I assume this smartfilter workflow works with the new NIK.

This thread caught my eye as I have a color-managed workflow with an Adobe RGB monitor for my editing and a second standard monitor for tools, etc.

It is critical that NIK properly display on a calibrated monitor so I am hopeful this is corrected soon. When it is , I will definitely be buying this. Where would be the best place to see that this is corrected?

With the latest available release, the problem I had (Colour management viewing problem in Nik apps) is now corrected.

I’ve created a jpg from Photolab with Adobe color space, and comparing view with Mac viewer and within Nik apps, it’s now ok:

The above image is from Analog Efex Pro, and other apps are also comparable.
I notice a difference with HDR tool but it seems that there is always a default correction applied which cannot be removed (I’m not a specialist of this tool and HDR in general as I never use it).

This is with standalone Nik app (I don’t use LR or PS).

That is outstanding! Will put aside some time to install.

If I could ask two more questions. Did you unintelligible the old NIK manually first or let the installer do it? I have all the old NIK filters.

Also, I have a few custom presets from the old tools. Does it keep those?
Thanks,
BJB

I have uninstalled previous release by the Uninstall tool available in the latest installer.
I’ve seen that it allows to keep previous presets, but not tried it as I don’t have any.

Despite being able to download the beta tests of Nik to see if the colour management issue was fixed over the last couple of months, I was at no stage able to install in a trial version, despite the support from DXO.
When the full version came out, I still couldn’t install the trial version and the support requests to DXO went unanswered.
With the rebate option running out today, I bit the bullet and bought the full version and thankfully, not only was I able to install but all previous problems that I had experienced with Nik Collection apps appear to have been fixed.
Specifically the colour profile mismatch and the previously posted crashing behaviour with High Sierra on APFS volumes
.
Yay!