Hi, When using EOS100D .cr2 files camera body in color rendering defaults to EOS1000D which is an older camera with a different sensor. I find no specific match for 100D/SL1 - closest match is 750D but EOS100D/700D generation seems to be missing from the available choices.

Isn’t it what you are looking for? 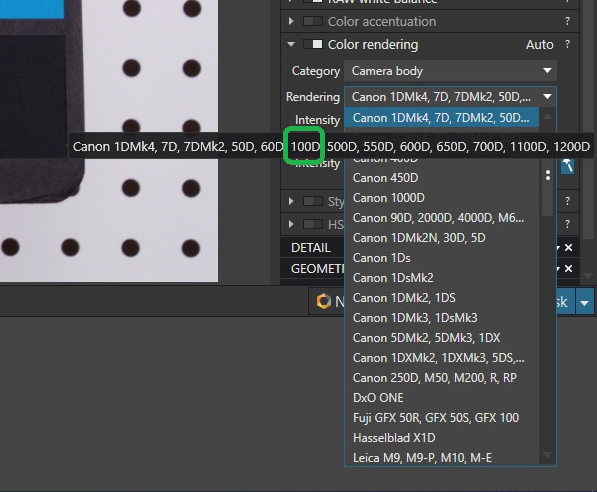 Okay, with Mac @akarlovsky can help you.

Alex, could you, please have a look?

Any bug should of course be fixed - well spotted

Note though that camera rendering is normally used to mimic the rendering of a different camera - for example so that the output from two different cameras will look as though they have been shot on the same one. So as you’re shooting on the EOS100D you wouldn’t normally want to render it as if it were shot on an EOS100D; that’s already what it looks like.

In my own experience, it doesn’t actually work that way.

So to sum up: I would just need your closest match profile for the EOS100D that will default to the camera (100D) recognized on import. Right now it defaults to ESO1000D

which is a quite older sensor generation. It seems to me like you had it right on the win version

True. I would buy a particular camera because I like the look and feel of that camera - and want to render exactly the colors and look of that camera ( I guess… ?) Maybe I am very old-school

You can use the string containing 50D rendering. 100D is in the code but on some reason we do not display it among the possible choices. We’ll probably fix it in the closest release.