Changing/resetting the default preset applied to an Image

I have been experimenting with the “default preset” setting in preferences and wonder if there is any method of changing the default preset that is applied to an image once that image has been edited once when a different default was set?

The manual states the following :

I would like to override this behaviour and revert some images to “DxO Standard” and I would prefer not to have to trash the database which will probably work.

Why not just reset those images and apply the new default preset? Or have you also made other edits as well?

My issue is that I would like to revert to a state of an image having never been seen by DxO before. If I reset an image it reverts to the default setting that existed whenever that image was first opened by PL.

In my case I was experimenting and set the default to a black and white preset from film pack, when looking at the images at high magnification I noticed some stuck/dead pixels. I opened the hidden sliders in the Denoise panel which was visible and I thought “switched on” yet the dead pixels were only corrected when I moved the Dead Pixel slider and they remained removed even when it was returned to its default setting of 24. Now I only did this once and probably was not paying enough attention but I suspect that default preset that I chose had switched off denoise and that possibly the user interface was not reflecting this correctly. I would like to check what I think I have seen using the same images as I know where the dead pixels are but short of either making copies of the images outside PL or trashing the PL database it does not seem possible to change the default settings applied to an image once they have been applied.

I hope that all made some sence!

All the DxO “standard” presets overwrite everything when applied. It isn’t necessary to do anything like deleting the database.

Simply choose a full preset and apply it. 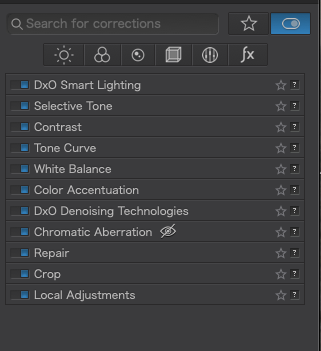 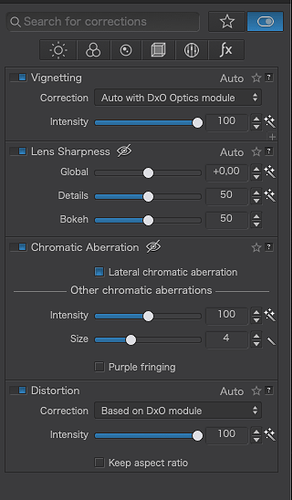 This will work if you apply the preset you have now chosen as default.

Thanks for your help and yes you are correct except that the very first preset that was set via preferences is the one that the reset command reverts the image to.

I have managed to locate some dead/stuck pixels and demonstrated to myself that I was imagining what I reported above. I probably should not edit images near midnight!. I have proven to myself that dropping the Dead Pixel slider to zero does indeed restore the dead pixels by removing the correction.

Thanks for your help and yes you are correct except that the very first preset that was set via preferences is the one that the reset command reverts the image to.

Applying a new preset overwrites these settings and all edits. However it’s an ordinary edit so when you reset in a later stadium it goes back to the very first default preset.
Or you’ve to close PL and copy your files to a new directory, change the default preset in preferences and afterwards open the new directory.

I would like to override this behaviour and revert some images to “DxO Standard” and I would prefer not to have to trash the database which will probably work.

I suspect you’re overcomplicating things, Simon … If you want to revert to the set of corrections that were applied when DxO encountered your image for the very first time, you can simply select “DxO Standard” from the list of Presets found in the “General Purpose” section … 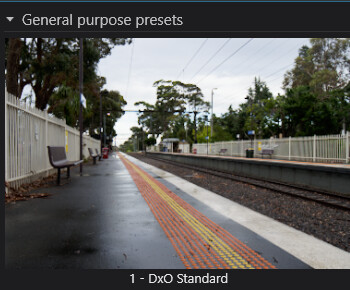 This is talking about something a little different (and not very clearly, I do agree !) … It’s saying that, if you change the default preset then the new preset applies automatically only to “new” images (that PL has not encountered before) … but, there’s no reason you cannot override that manually (as above).

Which is, sort of, what I said, but you managed to say it clearer

I think I possibly unclear in my initial question which should have been : is there any way of changing the initial preset once it has been set on initial image read/edit/display?

I think that the answer is no from within PL4. However, I suspect that simply changing the image filename outside PL4 will bake in the preset set in PL4 preferences as will deleting the database.

is there any way of changing the initial preset once it has been set on initial image read/edit/display?

And, as @John-M and I have both said, the answer is yes.

If you want to “reset” an image to a different default profile, all you have to do is to apply the different preset - it will overwrite the initially applied preset.

You don’t “reset” the image. You add an edit with the preset values. Every time you reset the image it goes back to the pre-edit situation.

Which is what happens when you apply any “full” preset. It overwrites any edits and makes it as if you had used that preset as the default when the file was first opened in PL

PL has 2 states: the pre-edit or pre-costumize and the costumize state. I don’t know how to express that more accurate

I don’t mean to be contrary but no it does not. It is not possible to change the “default” preset from the one set when the image is first seen by PL4. At least not in my version .

I find this illogical as the reset action resets the image to what might be an unexpected state. I would prefer if I was given the option of reseting back to the present default preset, this would allow me to simply change my mind.

Outside PL. Or copying them to another directory.

As I said, using a full preset, overwrites all edits done since the image was first opened.

Yes, if you truly reset the image, even that will be lost but, at least you have the same image as if you had opened it with that preset.

If you want to make an image to have a new default preset, after you have set the new default preset in preferences, simply delete the DOP file whilst PL is open, then delete and recover the image files. You will see PL reload them with the new preset as its starting point.

That’s all right. But it doesn’t give a solution to Skids problem/question. He wants the default preset, that’s the pre-costumize preset to be changed.

It is not possible to change the “default” preset from the one set when the image is first seen by PL4. At least not in my version .

No, default set in preference, is attached to the image on first discovery by plv4.
So a “reset by the button” results is that preset.
If you like to have more then one starting point you need to build them yourself and start as default on this: 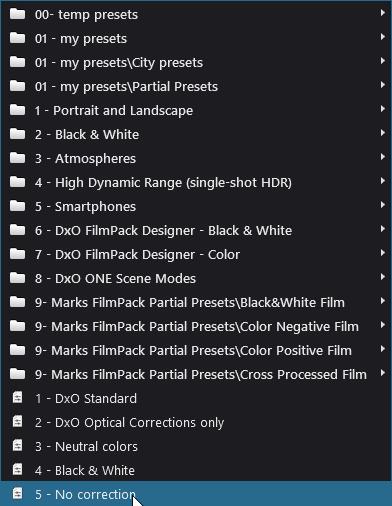 possible presets392×506 37.4 KB
No corrections or optical correction only.

And use your own folder structure to build (partial) presets which you apply on a image/folder of your liking.
A reset from the button is only a command “apply default preset stored in imageproperties” (first one so to speak.)
So by choosing a preset by your self is about the same action: override all settings with this preset.

A partial preset is different: in that you can mask a preset to active and nonactive change.
(overwrite and skip)

So resume: choose a certain basic preset based on your liking.
create presets for camera types and images types, name them and store them as you like.
select images and apply preset, (use historylist to go back to that if you like to “reset” image)

and of you go, multi preset setup.

I thought I witnessed an issue and wanted to repeat the process with virgin raw files but that is not possible from within PL4 without changing the filepath of the file/s outside PL4. 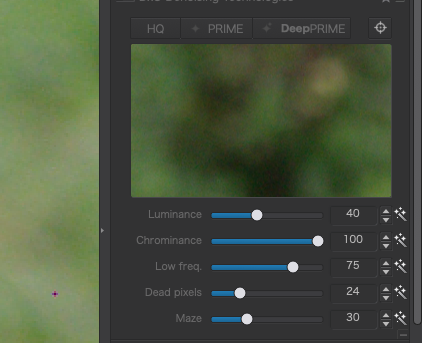 Looking at the UI the issue seems to be that in some circumstances none of the three noise reduction options is selected yet the sliders are shown in blue. Bumping a value activates the panel or selecting a type actions the slider. Confusing…