Changes made in PL5 not recognised in PL6?

I’ve just installed the demo version of PL6 and it doesn’t seem to recognise changes I’ve made to my photos in PL5. Am I missing something?

Do your RAW files have .dop sidecar files?

@platypus while the DOP files should get you out of a hole the database should have been carried over successfully, albeit it wasn’t from PL4 to PL5 for users (me included).

Either way the edits should be present @fotoralf.be either via the database (if it was updated successfully) or via the DOPs that should have been created when the edits were made in PL5.

If the database was not carried over in the location you specified (I use Win 10 and cannot speak for specific Mac issues) then PL6 might have defaulted to its default location and opened a clean database but the DOPs should then have worked (if present). Presuming that you have either the 'Save settings… 'and ‘Load…’ set as shown below or have forced an export of the (DOP) sidecar (!) 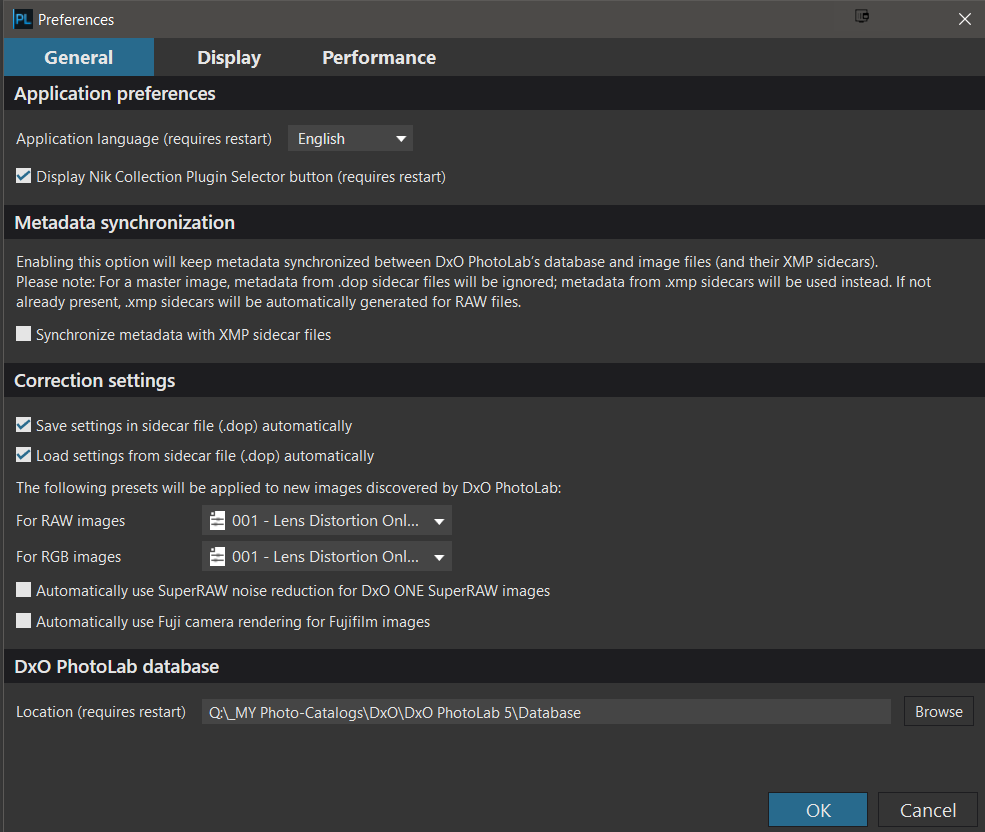 The default db location for Win10 location is

However, you have not stated what operating system you are using nor what version of PL5 you edited the images with that you are now opening in PL6 demo. 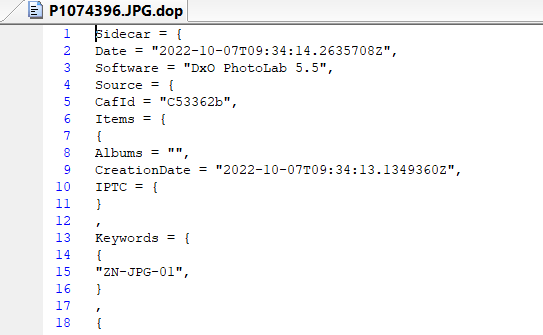 I took part in the PL6 beta test but have not yet installed the PL6 release version on my Main machine so I have no yet encountered any problems.

When I do so (install and/or encounter “problems”) I will establish a Test directory with PL5.5.0 and backup the PL5 database before the installation and I will navigate only to that Test directory on PL6 until I am sure that everything is as it should be! I am not concerned about preserving my database because I destroy it a lot while testing but the DOPs for my images are important (and backed up along with the images!).

@fotoralf.be Have just installed the trial version of PL6 on my Main system (Beta testing was done on my Trial system). 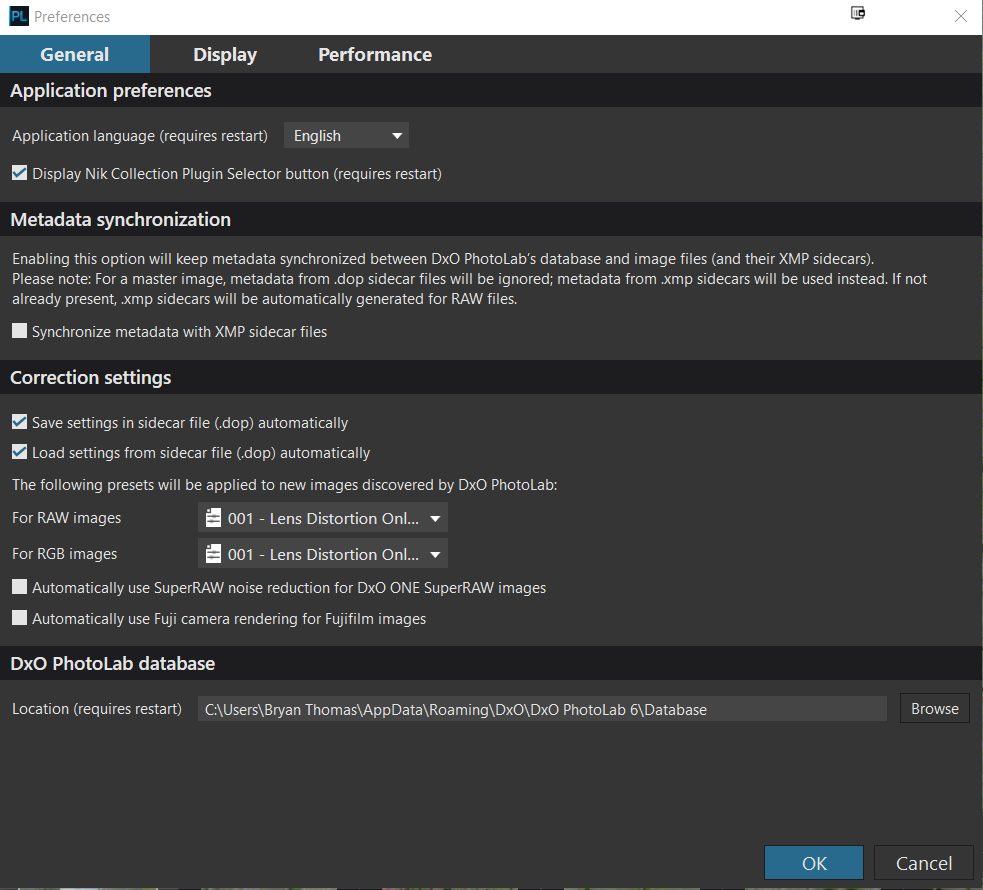 The database was populated and some “external selection” ‘Projects’ that had existed before were intact. Navigating to the “not known by PL5” directory, PL6 discovered the images and the DOPs and set the edits accordingly!

PL 6 created no DOPs were there were none before but did update the PL5.5.0 DOPs to PL6.0 DOPs.

So for me the upgrade appears to be mostly painless so far!?

Do your RAW files have .dop sidecar files?

That’s probably the key question, Ralf - - However, since you’re in demo mode (and may not necessarily proceed with the upgrade), do NOT be tempted to point PLv6 at folders containing {RAW+sidecar/.dop} combos processed with PLv5 - because that will convert your sidecar files to PLv6 format … and PLv5 will then not be able to deal with that.

Instead, create a PLv6-Test folder - move a selection of {RAW+sidecar/.dop} combos to this test folder - and proceed with your testing from there.

Instead, create a PLv6-Test folder - move a selection of {RAW+sidecar/.dop} combos to this test folder - and proceed with your testing from there.

@John-M That is sound advice for everyone, including those that took part in the Beta Test.

In other tests that I have been conducting I discovered that edits from PL5.5.0 did not appear to be recognised by my test system that has PL5.1.4 installed!?

Backwards compatibility is not guaranteed, so ensure that all backups are up-to-date before starting to use the new release to protect important pre-PL6 edits and consider securing an additional copy of DOPS (and xmp sidecars) separately (a smaller backup that can be secured longer) and/or copying and pasting all sidecars (DOPS and xmp) to the same directory to get a (renamed) copy in situ, until you are sure that the new release is doing exactly what you want and expect, then do what you want with those additional (sidecar) security directories/copies when you are happy with PL6.

Don’t overwrite a backup that contains PL5 or earlier DOPs until you are happy with whatever PL6 is doing to your images!

In addition, do not remove the old software release (if you have one) until you are happy with the new one!

I’ve just installed the demo version of PL6 and it doesn’t seem to recognise changes I’ve made to my photos in PL5. Am I missing something?

Well, I tried this with the very same file in PL5 and PL6 – after having closed one version then alternated to the other one …, e.g.

BTW, all the time there was 1 dop-file, showing the last used version, while PL5 and PL6 have their own database. – I didn’t check to introduce a new setting from PL6, that doesn’t exist in the previous version.

So far, I’ve never had any issue with seeing edits made in a older version pf DPL in the newer version.
Per default, I switch off automatic import and export of .dop sidecars and disable autosync for .xmp.

As always, .dop sidecars are not backwards compatible…unless you edit their version number. While doing this is not officially supported, I found that it always worked on my Mac so far.

Note: Even if you set DPL to automatically import .dop sidecars, it will not import changed sidecars automatically while DPL is open. Restarting DPL will not help either. The word "automatic is misleading…but if you import sidecars manually, things work as expected.

@all: I’ve been busy over the last few days, so sorry for not responding sooner to your suggestions and answers. Your analysis is quite correct. Yet, the problem has in a way solved itself due to the fact that I don’t see sufficient improvement to justify the expense for upgrading to PL6.

Indeed, I find the de-noising function of ON1 far superior, so I’ll rather be upgrading to their new version to be released tomorrow. Even more so because it works not ony with RAW files but just as well with the TIFF files of my film scans.

Once again, many thanks to one and all for your help.