When I process my astrophotography images then I start with the development of the RAW file using Photolab 5. I do a minimum of processing in PL, only using a part of the optical corrections and Deep prime noise reduction and export them to TIF-files for further processing like stacking and stretching. I know that each step in this workflow can introduce artifacts and that light pollution can amplifly this.

I can show this using what is called a flat-frame. That is a shot of a uniform light source using a white T-shirt. This was then developed in PL in the same way as an astro-image.

After this step, the TIF file was stretched with Siril and a color map was also created to clearly show the banding. I did this for various combinations of Vignetting and Distortion correction, see the picture below. 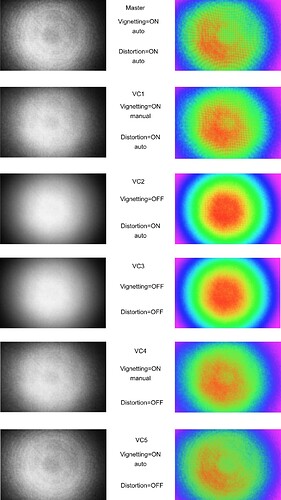 Every row shows 2 images, on the left is the stretched flat file and on the right the color map of this.

The first row (Master) shows the effect with Vignetting = ON (auto) and Distortion correction = ON (auto). Circular and blocked patterns are clearly visible.

The second row (VC1) ) shows the effect with Vignetting = ON (manual) and Distortion correction = ON (auto). The circular banding is less prominent, but the blocked patterns are clearly visible.

The third row (VC2) ) shows the effect with Vignetting = OFF and Distortion correction = ON (auto). The circular banding is gone, but the blocked patterns are still visible in the red and yellow areas.

The fourth, fifth and sixth rows shows the effect with Distortion correction = OFF in combination with Vignetting correction ON (auto/manual) and OFF. The blocked pattern / banding is not present.

Therefore, I think the block pattern / banding is caused by the Distortion correction in PL. And is a bug like the one in the Vignetting correction.

I hope DXO fixes these bugs in the near future.

Thank you for the feedback. Let me ask @Marie to have a look at it.

would you provide us some RAW files to look at, please ?
You can use https://upload.dxo.com/

I’ve uploaded a zip file with 5 RAW-files (flat-frames).
For file ‘_DSC9040.NEF’ I also included the .dop file and the TIF-files I’ve used for this topic.

Can you tell me if this issue caused by applying Distortion Correction is fixed/solved in PL6?