I’m a real estate photographer and have been using ViewPoint for about a year. It’s really made getting verticals correct, really easy and quick. I noticed that something was off after installing v4.

With version 3 I was getting about a 90% rate on using auto. Very rarely did I have to go in and set verticals manually. With version 4, my success rate is around 40%.

I was curious if anyone else has noticed the change.

I haven’t noticed any decrease in the “hit-rate” for the auto-perspective function. Are you using VP4 as a standalone or as integrated within Photolab? Also, what platform are you on, Windows or Mac?

I’ve noticed it struggles a bit with certain photos that have rather obvious verticals and horizontals, and have reported that to DxO for consideration. (I don’t know if they’ll reply.) But I haven’t tested the same photo between VP3 and VP4 to see if there’s any actual degradation of the detection algorithm. If you can do that, I’d love to know the results. (I’ll look for an opportunity myself, but that might take a while.)

The photos I’m giving VP4 right now are complex with a need for perspective correction in both the foreground and the background, plus many verticals that simply can’t line up parallel. So I often have to tweak the auto-correction and make compromises. But now we also have the ReShape Tool!!! It has its flaws, but it’s a great addition to VP4 for complex geometry and most especially for filling in the areas of the image frame that become black through perspective and horizon correction.

I just tried a photo in both PL5 (ViewPoint 3) and PL6 (ViewPoint 4). Neither could auto-correct the verticals perfectly in my complex photo, but VP4 undercorrected the image more than VP3. Adding some more vertical adjustment to both, with the grid overlay as my guide, resulted in equally corrected verticals but different amounts of distortion in the two images. So there are differences I can’t account for in the auto adjustments. I’m inclined to think VP4 looks worse on comparison. Switching to purely manual perspective correction adjustments, I see that VP3 and VP4 are equal in every respect.

I’ve figured out a few things. First, I’ve noticed in the past that applying automatic Perspective correction for verticals often adjusts the horizon also without changing the setting of the Horizon adjustment slider in PhotoLab. It believe it used to be that Perpsective auto-correction automatically turned on the Horizon adjustment in auto mode (keeping it set to 0.00), and then nothing would change if you turned Horizon on and off. That behavior changed somewhere along the line.

But this wasn’t the case on my first try with PL6! At first, PL6 produced a better result when auto Horizon correction was engaged first. But the Horizon slider didn’t revert to 0.00 after engaging auto Perspective correction. I then only had to apply +5 to Up/Down, and the result looked better than in PL5. But it didn’t last: subsequent tests failed to produce anything different than with only automatic Perspective correction, and auto Horizon resumed its normal behavior of reverting to 0.00.

If I simply set auto Perspective correction (no compensation), then manually adjust the Horizon slider to get the verticals on one side of the image correct, the result in PL5 and PL6 is still different. So it’s clear that auto Perspective correction by itself is different between PL5 and PL6 (and might be different between VP3 and VP4 in PL6), with an automatic horizon adjustment to also be expected regardless of whether or not the Horizon palette is set on or off, auto or manual.

PL6 is capable of a good result but isn’t producing it consistently and even seems to be malfunctioning sometimes.

So, one more test: if I set Horizon to -2.00 with my test image (which gives correct verticals), then turn on auto perspective correction, what happens? At first, nothing happened in PL5/VP3!!! But then turning Perspective off and back on caused an unpleasant shift. In PL6, the image shifted right away.

So both PL5 and PL6 are unstable.

How much manual correction is needed now to get the largest verticals I’m measuring straight? In PL6, only -5. In PL5, -13! And the differences between the two results are much less severe than before.

Which is better, PL5 or PL6? I don’t know, but they sure are different. I had no idea what I was getting myself into when I started testing this, and now I’m dismayed.

So I turned off Horizon and Perspective adjustments in PL and exported my RAW image to TIFF. Then I opened that in VP3 and VP4 standalone (Windows 11) to test automatic Perspective correction, etc.

VP 3.1: auto Perspective correction of verticals produced a decent result, needing +5 Up/Down to improve upon it.

VP 4.0.1: The result also needed +5 Up/Down to improve the vertical I measure, but the overall image is better than with VP 3.1. VP4 needs more volume distortion correction to make pillars at the edges of the image less fat, but the VP3 image is more tilted.

Perspective correction off, Horizon correction on and auto: VP3 and VP4 give identical results.

Adding Perspective correction to this for verticals: VP3 and VP4 give identical results - but only if I leave the Up/Down slider at +5!!! If I make this slider 0 in both VP4 and VP3, the results are different!

This is so confusing.

Well, it’s nice to hear that someone else noticed the same thing. Right now I have covid, so my energy level is pretty low, but I’ll try to find some examples between VP3 and VP4 that show that the latter isn’t doing as well.

The main reason I noticed, is that with VP3 I was always amazed how quick it was in my workflow. I even did a screenshare with a friend and he was blown away at how good it was. Right now, the auto function is almost worthless to me. What I mean, is that it’s generally faster now to just manually set the verticals. 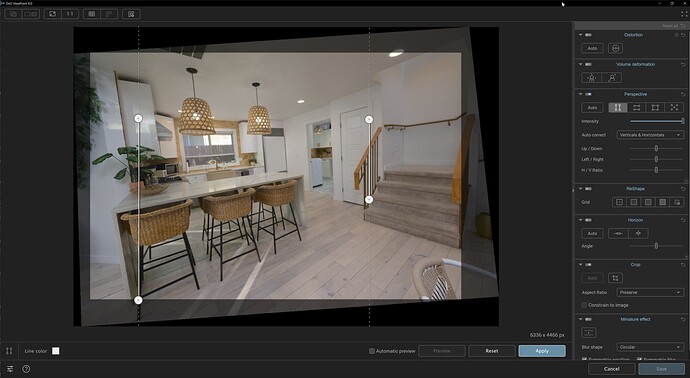 I’m using it as a photoshop plugin on Windows.

Here’s an example. VP3 seemed to be quite a bit smarter about grabbing verticals. 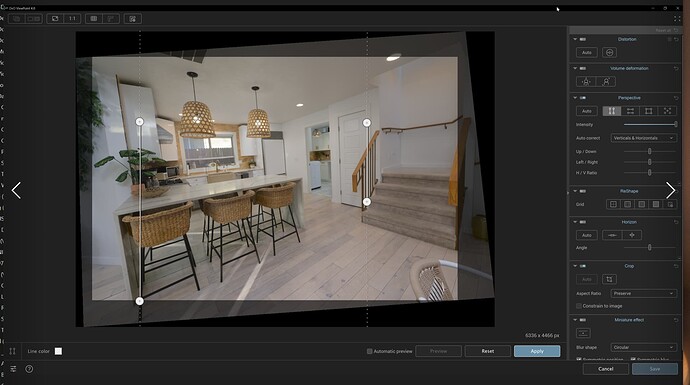