Hello everyone,
Since I sometimes take pictures deliberately over exposing in order to use ETTR, I now have to manually adjust the exposure in each picture in order to have the correct one.

I would like to know if it is possible to have another entry in the “exposure compensation” dropdown to look into the EXIF data and automatically apply the correct adjustment.

Since I sometimes take pictures deliberately over exposing in order to use ETTR, I now have to manually adjust the exposure in each picture in order to have the correct one.

I would like to know if it is possible to have another entry in the “exposure compensation” dropdown to look into the EXIF data and automatically apply the correct adjustment.

If you use ETTR correctly, you shouldn’t need to adjust the exposure.

But you will need to adjust the rest of the tonal range and how you do that will depend on the rest of the image content and the look and feel you want to achieve. This is not something that can be done to your taste automatically.

See this thread for an example of how to nail it perfectly. Editing high dynamic range images in PhotoLab 5 - #3 by Joanna

Note: ETTR was originally devised for low contrast subjects and old, noisy cameras. The idea was (and still is) to get darker parts off of the noise floor by overexposing…

Let me break your question down.
1 your delibratly overexpose 1 2/3 stops? (rawheadroom in exposure.)
2 because camera’s tend to expose for jpeg in AE.
3 when you look at them in DxOPL you find them too bright?
Even when gou use the auto exposure correction?
4 so you want a specific automated exposure correcfion mode which jams the histogram to the right corner?
Like a eyedropper you could use to point as “mark this as whitepoint”?

The eyedropper whitepoint and blackpoint would be a nice extra on the exposure compensation but a “hit rightwall” button?
And you want this in a preset build as fully automated function?

Thank you all for the replies.

What I meant is very simple, yet I didn’t express myself very well, sorry.

I’m going to borrow a perfectly exposed image, with +1⅔ EV in camera, from @mikemyers to illustrate my point.

SOOC, Mike’s shot opens in PL to give… 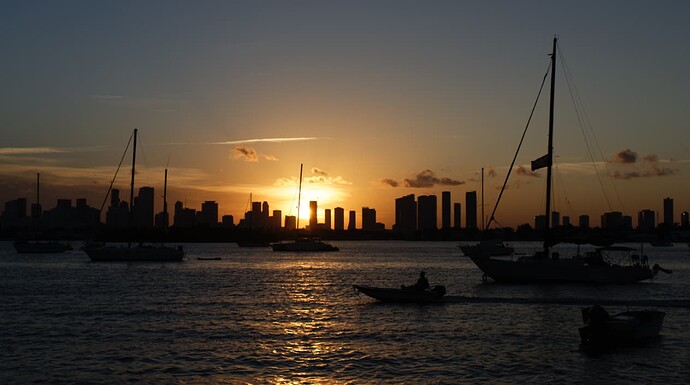 With minimal adjustments, he gets… 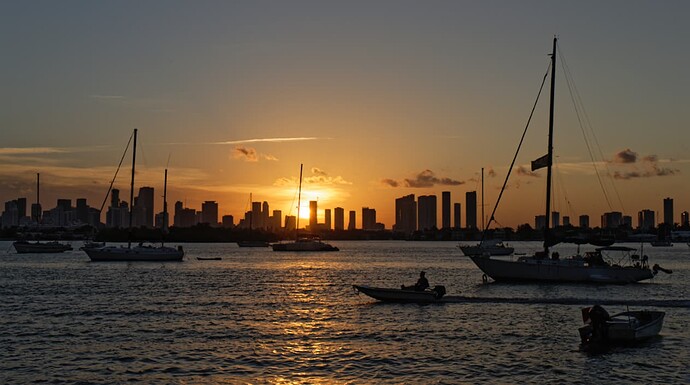 What you are asking for is that PL automatically applies -1⅔ EV, which would give you… 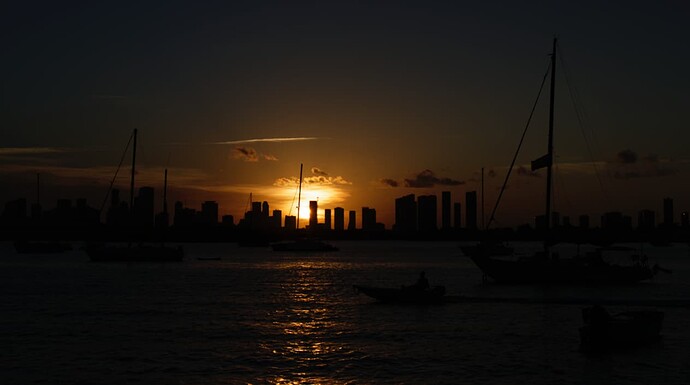 So how does that make processing any easier. I now have even more work to do the recover any sign of detail in the shadows.

I really don’t understand what benefit there is to your proposal.

Ah know i understand,
you want a “baseline button”.
you overexpose the scene so the jpeg would be also too bright when doing nothing.
By hitting your request it does camera EA - EVC= new value.
And is "AEcorrection " not sufficient enough?

My interpretation is he wants a quick way to view the image at whatever the original settings were in his camera for the exposure. This is before he re-adjusted the exposure to over-expose, or under-expose. Whether or not this is useful is not the point - he just wants a quick way to view the scene "the way the camera saw the scene before he made changes to the settings.

Regardless of what the exposure was that the camera actually used, he wants to see the scene the way his camera saw the scene, without any changes.

If the camera records how much he over-exposed by (say, +1.7 stops) he wants to view the scene without those 1.7 stops, to see what the camera would have captured, had he not made any changes.

Or, the way I would think of this, does the camera record the “plus 1.7 stops” in the EXIF data". …and if so, he could view the image as usual in PL, find that value, and change his exposure in PL by lowering the exposure by 1.7 stops - same end result. Easier for everyone - but only if the “exposure change” was recorded in the EXIF data.

(Might or might not be useful in processing, but it would show what the camera wanted to do, before he did the +1.7 adjustment, which I think is what he wants to see on his screen.)

Aha! It does get recorded!
https://www.geofflawrence.com/photography_tutorial_exif_data.html

So, is this change listed in image data while using PL?

Except you never know what the right exposure was. See by example how Joanna sets the exposure.

ETTR is a way to minimalize noise

But not only that. Before people had screens on the back of their cameras, we used to “place” an exposure to suit the film type and to maximise capturable dynamic range. Thus, “exposing to the right” of the available dynamic range.

ETTR, as you describe it, is a technique of letting the camera work out what it thinks is the correct exposure, taking a “test” shot, adjusting to move the histogram and trying again. If you are going to go to all that trouble, you might as well put the camera into manual mode and spot meter the scene correctly - then you will know exactly what the histogram will look like in processing without even looking at it on the back of the camera.

If I put Mike’s shot back into my camera, the in camera preview and histogram show… 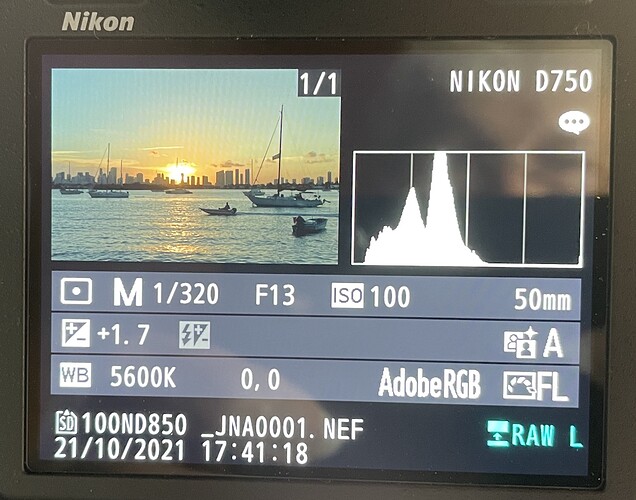 Are you really saying that Mike should have placed the histogram further to the right? I’m sorry, but that would have simply blown the sky to smithereens.

Don’t forget the histogram you see on the back of the camera is that of the JPEG preview, not the RAW file.

Here is the JPEG extracted from Mike’s RAW file, as viewed in PL… 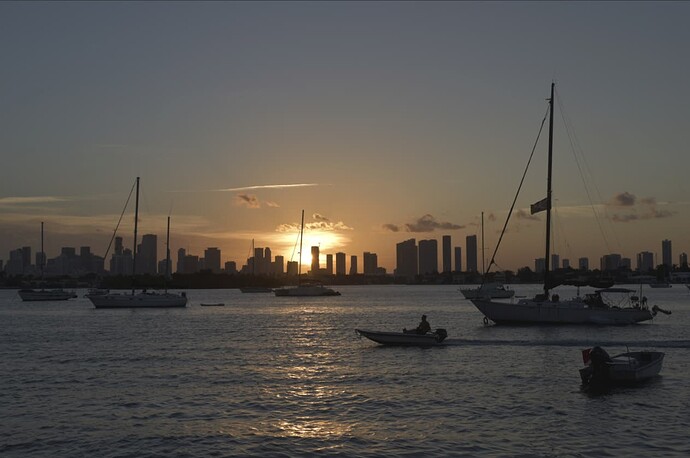 This is what the histogram on the camera was constructed from, not …

… which is the SOOC RAW.

It is incredibly important that you don’t base a RAW file’s histogram on what you see on the back of the camera. The only way to get reliably exposed RAW files that will process easily in PL4 is to get to know your camera, and measure the light correctly, according to the lighting conditions, using an appropriate metering mode, which for contre-jour shots is invariably spot metering

But never, ever over-expose a RAW image - you will never recover blown highlights.

True, but he want’s the choosen by camera exposure.
Right exposure is “ETTR” level. But sometimes you expose accoording to a certain subject to get that right, like a face or group of people or… The right exposure is the one who give’s what you intended to get.

ETTR is just a trick to minimize noise by overexposing the image and later on correcting that again. The idea is that some noise is a constant of the sensor. By adjusting the overexposed image later one is also lessen the noise. Of course overexposing without clipping. Your histogram doesn’t have space left on the right side so you can’t use that trick.

For example with the Nikon D750 → @mikemyers

That way, one has 2 (3) different settings at hand.

I think that the original poster wanted something that compensates exposure shifts automatically in PhotoLab and I answered with that in mind.

I’m sure that Mike will try your proposal…

Except you never know what the right exposure was. See by example how Joanna sets the exposure.

Totally true, but we’re all assuming things - why not also tell him how to get the answer he was asking for, along with our better suggestions?

He just wants to see the photo he would have gotten, at the recommended settings, with no adjustments. Maybe he’s just curious, and wants to compare that the captured image would look like had he not made the adjustments? Maybe someone asked him to show that to them? It may not be a useful tool for anything, but I too would like to be able to see that, and now I know how, as long as the exposure compensation is captured in the EXIF data.

I think that the original poster wanted something that compensates exposure shifts automatically in PhotoLab and I answered with that in mind.

Actually, having aired the discussion, it might be interesting to put a “hotspot” on the Exposure Compensation part of the EXIF palette that could be clicked on to “normalise” it.

What do folks think of that?

But never, ever over-expose a RAW image - you will never recover blown highlights.

Both false and true…

True: Blown highlights are gone and cannot be recovered. They can still be “improved” e.g. for printing by tone curve manipulations that you’ve illustrated a few times.

Hmmm. I remain unconvinced but open to examples of how this would work

That might be what he really wanted, but it’s not what he asked for

I’d vote for a normalizer tool too, be it as proposed by Joanna and/or for something more universally applicable, like the normalizing tool that exists in Capture One (pick up a colour and apply it to a few images by clicking on the respective areas in these images)