It’s very common for photographers and digital photo development experts to share their Lightroom or Capture One presets either for free or even paid add-ons.

A common mode of delivery these days are LUT (look up exploitation tables). LUT is a shared standard not an Adobe or other proprietary standard so there’s no legal barrier for DxO to add LUT technology to PhotoLab.

While I don’t use these LUT presets often (sometimes I like to take a look at them), by adding LUT support to PhotoLab, DxO opens up the software to new audiences and new pro photographers who will be able to include DxO PhotoLab compatibility in their product notes. Some PhotoLab users have separately requested support for Lightroom Presets.

A few LUTs can be added as ICC profiles – currently supported – but most LUTs require CUBE support (Affinity Photo, Luminar, CaptureOne, Lightroom all support CUBE). There is no easy way to convert from CUBE to ICC unfortunately: only a clunky $50 application. Most RAW developer software users don’t have to worry about this program as there’s no need to convert CUBE or other LUTs to ICC to use LUTs. At this point, only DxO PhotoLab users don’t have the ability to add LUTs. As a tested example, in Affinity Photo, it’s possible to add LUTs as adjustment layers in as many variants as you wish and with opacity. 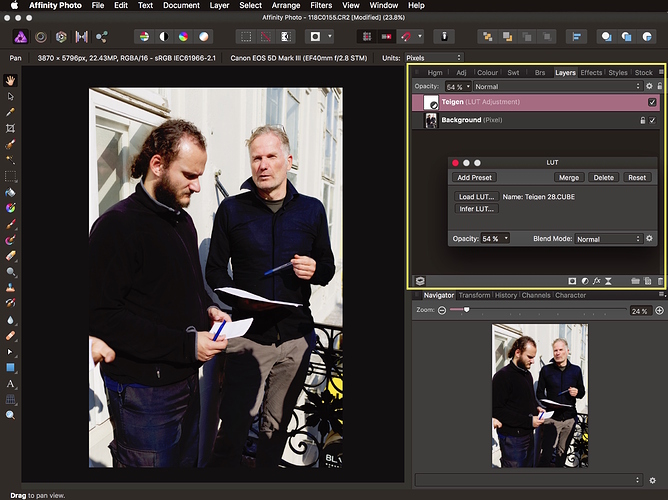 What we are asking though for here is pretty simple: a LUT palette which allows us to add a CUBE or other LUT along with an opacity slider.

Hélas,the original request for LUT support was in French, hence it languishes with a single vote.

So I am reposting in English, not because this is a feature at the very top of my list – GPU acceleration and better performance on Mac are there at number one, closely followed by better colour tools, more of which used to exist.

For many current and future users LUT support remains both a useful feature and a powerful selling point.

I appreciate that this is an older thread, but I agree. LUTS are becoming increasingly important to me. They can be used for both photo and video colouring. To my mind a LUT can change the look of a photo much faster than making individual adjustments. Also, they permit a consistent “style” to be generated in one is after such things.

I use LUTS in Affinity Photo, and also in the not all together straight forward (and very pricey) 3D LUT Creator.