A loupe to check sharpness/focus

I would like to have a small loupe that could be moved around the image with the mouse (like the cursor) and would show the small area under the loupe at a pre-determined magnification. Of course 100% would be good for a default, but having other options, 200% etc, might also be good. This loupe would be available on the “fit to screen” image as well as the full screen image version.

It would be similar to the “magnifier tool” in the detail panel, but would be in the form of a tool on the main screen.

Yes, this would be useful. Faststone has that feature.

I’d love this feature too. Aperture had a fabulous loupe that I used all the time back in the days when I was still using it.

You are correct! I forgot about that. The Magnifier in Faststone is perfect, it is very adjustable and something similar would be wonderfully useful in PL.

Capture One also has a Loupe, but it isn’t as adjustable as Faststone. Or at least it wasn’t when I used Capture One in the past.

@bconner, I haven’t used these other programs to know how they operate a loupe. Before I vote on this feature request, could you describe the difference in functionality/use between what you are requesting versus setting the image display scale to 100% (or otherwise, as desired) and then navigating around it using the Navigation pane, either docked or undocked ? (Doing the latter, the toggle for adjustments and geometry remains available. How would it be accessed in your requested feature ? Would you expect NR and sharpening to be applied under the requested loupe ?)

My idea is that the loupe would be used to quickly evaluate image sharpness/focus, therefore any geometric corrections would not be required. I would like sharpening and noise reduction to be applied under the loupe. This loupe would be very useful, in my opinion, in the PhotoLibray tab to assist in picking images to process. But it would also be useful in the Customize tab.

In my opinion, the main difference in functionality would be that it would be faster to use in my opinion as well as be more intuitive. The Loupe could be the default cursor, or tool, in the PhotoLibrary tab. Currently, the user has to place the hand symbol cursor over the subjects eye, for example, and double click to go to a 100% view to check focus/sharpness. With the Loupe activated, the user would simply have to place the Loupe over the eye and the eye would be shown at 100% in the small hovering window which is part of the Loupe tool. The Loupe in Capture One functions just like this and is extremely useful for culling images.

Other than a keyboard shortcut which works in both PhotoLibrary and Customize tabs, the loupe would be accessed via a small loupe button next located next to the zoom controls in the tool bar of the PhotoLibrary tab. In the Customize tab, the loupe would be accessed via the tool bar via a small loupe symbol (button) maybe between the White Balance Color Picker and the Horizon tool for example.

Sorry if the info above seemed rambling. I wrote it on the fly around being distracted several times.

With a single click of the mouse button, you can examine any part of the entire image very fast by simply moving the loop around.

In Faststone the magnification, size and shape of the loop is user-defined in the settings. Thereafter, all that is required is a single click. Example, I have mine set to 100%, 500 pixels, round.

Note, the loop does not operate if the picture is in full screen mode (100%) as this defeats the purpose.

The advantage is speed. In PL, if you view at 100%, then the entire picture may not be on the screen and you would have to shift the picture with the navigation keys. The end result will be the same but the loop will be much faster. It would be similar to viewing at 100% then grabbing the picture with the mouse hand and dragging only much easier.

The loop should show exactly the same image as you will see if the picture is set to fit on screen - e.g.35%. So the picture is 35% whereas, the loop is 100% (or whatever you have it set to).

I would not have the loop show anything different.

Thanks for that. I can now see the additional benefits it would provide in PhotoLibrary mode (for those who use that functionality of PL) as a means of culling etc.

This is an excellent video showing the loupe in action in Aperture. The loupe in that application really was excellent. It was fast to render the enlarged area and easy to utilise (a simple shortcut key press to show/hide the loupe). 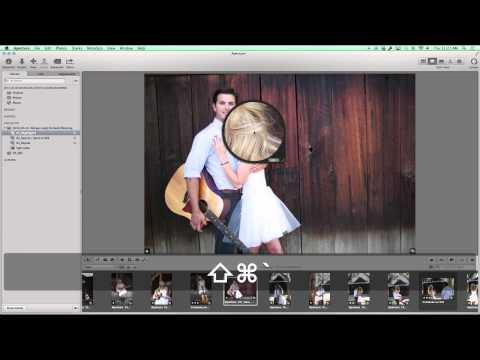